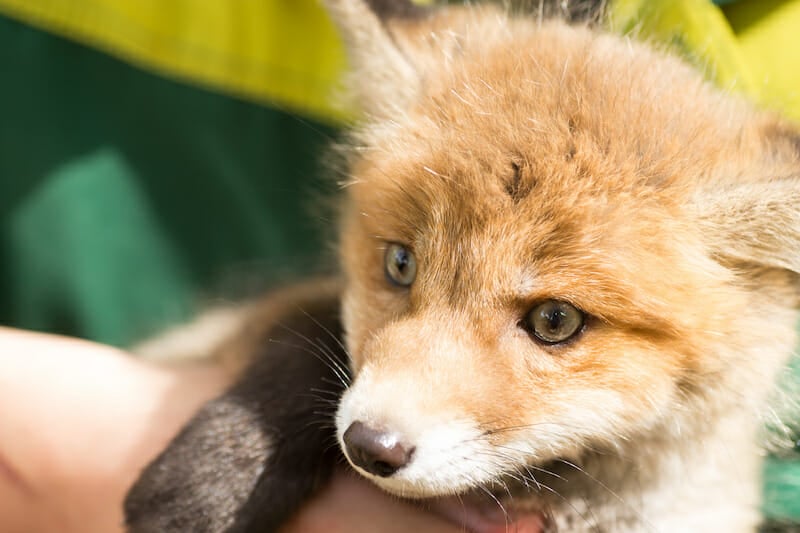 Paul Oliver, master of hounds at the South Herefordshire Hunt (SHH) in England, has been found guilty of animal cruelty after video footage showed him tossing live eight-week-old fox cubs into the kennels of his hounds “to instill in the dogs a bloodlust for hunting”.

The judge at Birmingham Magistrates’ Court found Oliver guilty of four charges of causing unnecessary suffering to a protected animal. However, despite the deliberate brutality of this despicable act, and causing the “painful, terrifying” deaths of at least four fox cubs, he only received a 16-week suspended prison sentence — meaning he doesn’t have to spend one minute in jail — and a paltry fine of £415 (about $525).

In total, four people were convicted of animal cruelty charges, but none of the guilty parties received a prison sentence or were banned from keeping animals in future.

We denounce the cruelty in this case and are very disappointed with this outcome.

A cruel hound keeper at South Herefordshire Hunt (SHH) in England took tiny, 8-week-old fox cubs from their mother and threw the terrified babies to the hounds to rip them apart, all for training practice to instill “bloodlust” into the hunting dogs.

Disturbing footage of perpetrator Paul Oliver, captured by Hunt Investigation Team (HIT) in May 2016, led to a conviction for this cruel act. But shockingly, Oliver received a suspended sentence, and will not serve a single day in jail for torturing and killing these innocent cubs.

In fact, four people have been convicted in this horrifying case, yet the court showed so little regard for the lives of these animals that not one of the defendants received any time in jail. Perhaps even worse, there is no provision against the defendants keeping animals — putting more animals at risk of cruelty at the abusers’ hands.

This slap on the wrist for severe animal cruelty is unacceptable.

We must speak out to send the message that animal abuse should be treated with the severity it deserves, and that abusers should not be able to get away with the torture and killing of innocent creatures.

Sign this petition to urge British officials to appeal this sentence and call for a more suitable penalty for the brutal killing of these fox cubs.

To support HIT’s work, donate to their GoFundMe page here.