SIGN: Justice for Skeletal Dog Left to Waste Away on Chain 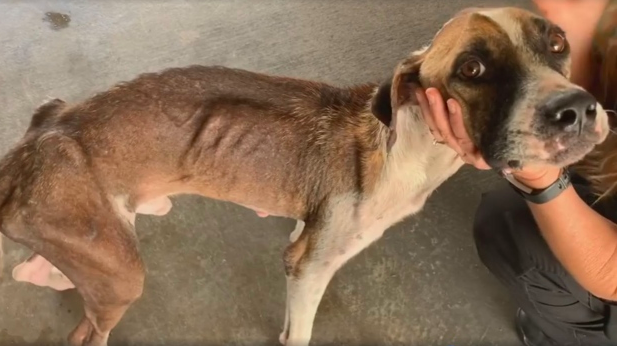 Update (5/3/2022): Sadly, Justice passed away suffering from a deteriorated jaw from infection, heart worms, and malnourishment, according to News 4 San Antonio. Owners, Rosita Cantu and Elias Castro, were arrested for one count of animal cruelty, a class A misdemeanor, according to Fox South Texas. Cantu is awaiting a pre-trial hearing set for April 12, 2023 and Castro is awaiting a preferential trial set for June 20, 2022. We will continue to follow this case. — Lady Freethinker Staff

In a heartbreaking case of animal cruelty, two people in Weslaco, Texas, kept their dog tied up on a chain and neglected the pup to the point where the animal is now fighting for his life.

The poor pup, renamed Justice by rescuers, is now nothing but skin and bones. His kidneys began to shut down. He also has a serious jaw infection and degenerative bone disease, which caused his jaw bone to be eaten away.

Witness Heather De Alejandro said in a Facebook post, “He has no teeth…He smells like he’s rotting. He has an infection in his mouth bc he’s drooling puss. He’s on a heavy chain that probably weighs more than him.”

De Alejandro also claims no food or water was visible, and people would try to throw food over the fence for the dog.

According to CBS4 News, Samuel Sanchez, Municipal Judge for Weslaco stated, “[The owners] are facing one count of cruelty to livestock animals, a class A misdemeanor.”

Justice’s life now hangs in the balance because of the neglect of his supposed “guardians.” These people should never be allowed to own an animal again.

Sign this petition urging the district attorney to prosecute Justice’s former guardians to the fullest extent of the law and ensure they can never hurt another animal.