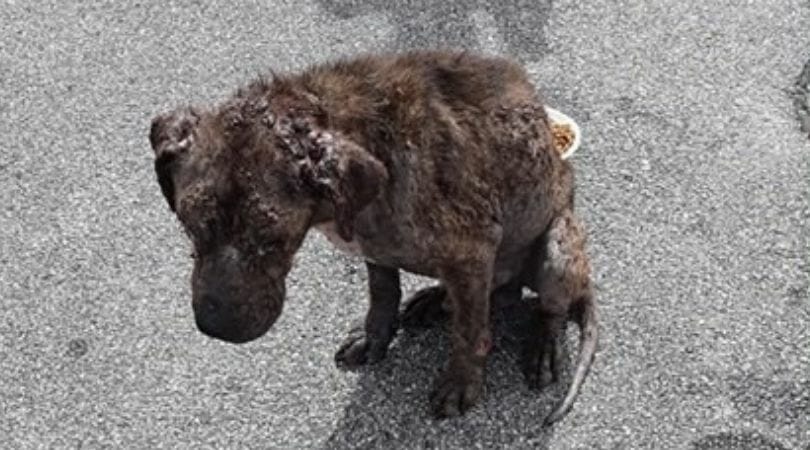 UPDATE (11/26/2021): A Griffin Police Department spokesperson said Ed was discovered in the front parking lot and there was no video evidence to show if someone dropped him off or if he just showed up here.

He added that Ed made a full recovery at North Griffin Animal Hospital and was adopted out and that he’s checking with investigators to see if anyone has been connected to this case. —Lady Freethinker staff

Someone abandoned Ed, a severely ill and malnourished dog, in a Griffin, Ga. parking lot. He is suffering from numerous medical problems that vets say will take months to heal, including fleas, ticks, heartworms, and a serious skin rash.

“Who knows how long he was out there fending for himself,” vet tech Emily Natale of the North Griffin Animal Hospital said. “We have such a close heart to four-legged guys like this who can’t speak for themselves or fend for themselves, and they need our help.”

Staff named the ailing pup Ed because his rugged appearance, caused by his skin infection, reminded them of one of the laughing hyenas from The Lion King.

The individual(s) who abandoned Ed remain unidentified, but whoever subjected this innocent dog to prolonged neglect and left him for dead must face justice. Sign this petition urging the Griffin Police Department to put all available resources into finding and arresting the person(s) responsible for this abhorrent crime.

This is an ongoing investigation. Anyone with information about this case, please call the Griffin Police Department at 770-229-6450 or dial 911 and have an officer contact you. You may remain anonymous.