SIGN: Justice for Shelter Dog Shot in the Face and Left in Ditch 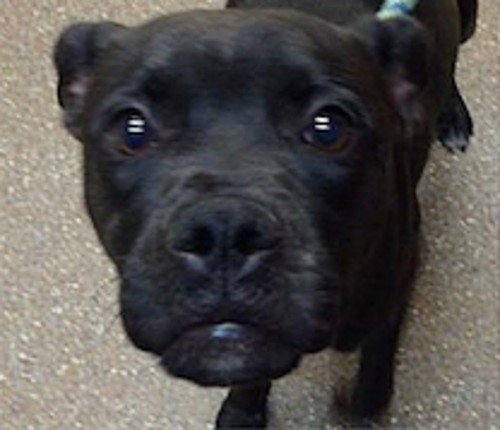 UPDATE (9/6/2022): The Charleston County Sheriff’s Office told Lady Freethinker no arrests have yet been made but the case remains open. “We continue to ask anyone with information to contact us at 843-743-7200 or anonymously through Crime Stoppers at 843-554-1111,” a spokesperson said. We’ll keep watching this sad case. —LadyFreethinker Staff

Bee, a sweet shelter dog, left her loving rescuers less than a month ago, supposedly bound for a happy forever home. But instead, sheriff’s deputies found her shot in the head and legs, with multiple fractures, and so weak that she was barely able to stand in a ditch alongside a road in Charleston County, S.C.

Deputies who responded to reports of the innocent dog, abandoned near Hwy 174 and Washington Lane, found her suffering from extensive injuries – including a close-range gunshot wound to the face, bullet wounds in each of her hind legs, and fractured bones.

She was rushed to the Charleston Animal Society (CAS), which determined her wounds were not fresh and that she likely had suffered in her bullet-riddled condition for at least five to seven days.  Staff removed several pellets from within Bee’s tissues but had to euthanize the sweet dog due to the extent of her injuries and a poor likelihood that she would recover.

Shelter staff identified Bee by scanning her microchip. When they called the person who had adopted Bee, they were told the dog had been sold. Deputies are currently trying to track down that alleged individual, with an investigation ongoing.

Bee’s tragic and untimely death sadly is not unique, with CAS reporting more than 300 horrific acts of animal cruelty since January – including a recent incident of a dog having his paws power-drilled into a wall.

Whoever shot and cruelly abandoned this innocent dog in a ditch to die must be found and held accountable for this atrocious act of cruelty. It’s time for Charleston County officers and prosecutors to send a strong message that no act of animal cruelty will be tolerated in the community.

Sign our petition urging the Charleston County Sheriff’s Office to use all available resources to find and charge the individual responsible for the death of this sweet dog and to forward any applicable animal cruelty charges on to a prosecutor.

This is an ongoing investigation. Anyone with information should call the Charleston County Sheriff’s Office at 843-743-7200.