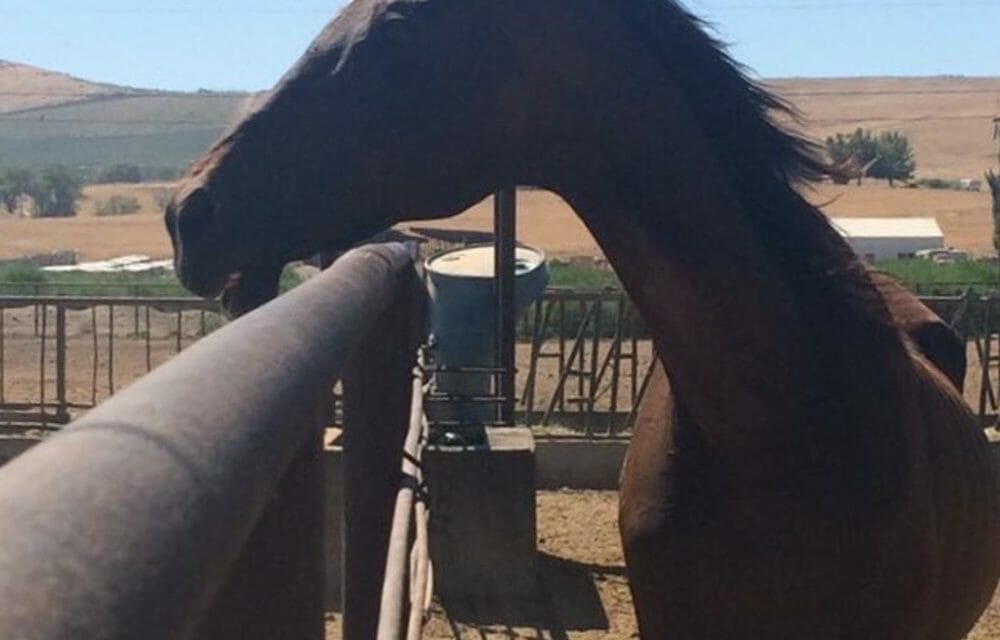 UPDATE (6/24/2021): Casey Schilperoort, a spokesperson for the Yakima County Sheriff’s Office, said deputies investigated Brad Pitt’s case in 2017 and could not substantiate the allegations of animal abuse.

“We talked with the horse owner, multiple veterinarians, witnesses, and any other persons who wanted to offer information,” Schilperoort told Lady Freethinker. “We did not have any complete or scientifically reliable evidence that was needed to support a criminal charge for the crime(s) of Animal Cruelty in the 1st degree or Animal Cruelty in the 2nd degree.”

“We also encourage people to take proper care of their animals,” he said.

We thank the more than 37,000 people who signed our petition demanding justice for this innocent horse. We will continue to follow the civil lawsuit associated with this case and to advocate for animals everywhere.

A 20-year-old thoroughbred stallion suffered a slow and painful death, bleeding from his eyes and nose after his “guardian” allegedly fed him a toxic “cocktail,” according to a civil lawsuit filed in Yakima County Court.

The helpless animal was only weeks away from freedom. A group of rescuers who had paid for him and were arranging to take him to a sanctuary.

The horse — named Brad Pitt for his good looks — caught the attention of animal activists who visited his paddock near rodeo grounds in Sunnyside, Wash. When “guardian” Donald Nowlin allegedly told them the horse would be sold to the rodeo for “smoking” — a cruel practice where a horse is hustled out of a chute and then roped by the back legs so he trips — they agreed to pay $250 for him.

The female activists also raised more than $2,000 to rescue five other horses allegedly bound for slaughter and suffering from untreated injuries and medical conditions, according to the lawsuit. They arranged to pick up Brad Pitt a month after they paid for him, plus boarding fees.

But during a call prior to the pickup, Nowlin allegedly told the women that Brad Pitt had broken his leg, that he gave him a “cocktail” of chemicals that he said “turns horses’ blood blue,” and that the horse then “went to sleep for good,” according to the lawsuit.

Pictures that Nowlin allegedly provided to the women showed the horse with a puncture wound on a swollen hock, lying on the ground “with blood coming from his eyes and nose,” and with injuries in “nearly all quadrants of his body shown in the image,” according to the lawsuit. Two veterinary necropsies concluded that Brad Pitt had died of animal abuse and prolonged suffering.

Nowlin contested those claims, stating in his filed response that his veterinarian had concluded that Brad Pitt died “from a fatal neck fracture” that resulted in “certain death within minutes, or at most a few hours” and “was likely self-inflicted,” according to court documents.

No horse deserves to die brutally by toxic chemicals. Brad Pitt deserves justice for his slow, painful, and prolonged death.

The civil case is set for a six-day, 12-person jury trial starting on Sept. 27 in Yakima County Superior Court.

Sign our petition urging the Yakima County Sheriff’s Office and the Sunnyside Police Department to also open a criminal investigation into Brad Pitt’s treatment and the ongoing conditions for Nowlin’s other animals, and to forward any applicable animal cruelty charges to the Yakima County Prosecutor.