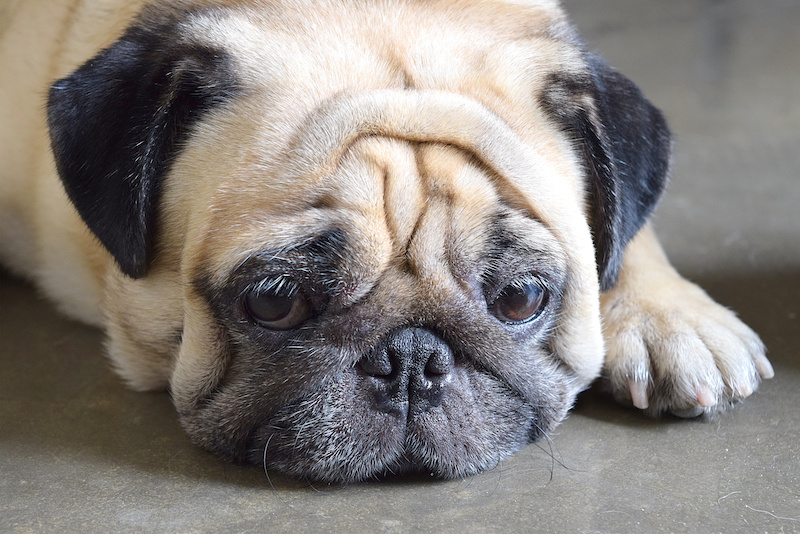 UPDATE (9/6/2022): Shelley Vaughn was sentenced to 364 days in jail with credit for 257 days served — meaning she has 108 days in jail left. She also was sentenced to four years probation, during which she cannot own animals, and must undergo a mental health and substance abuse evaluation. She also paid out $3,000 in a civil suit for Bucky’s funeral and expenses should his guardian choose to adopt another dog. We’re grateful that the Pinellas-Pasco Circuit Court took this case seriously and hope that Bucky is now at peace. —Lady Freethinker Staff

A sweet, innocent dog suffered a brutal and pointless death after being thrown off a seventh story balcony and smashing into the asphalt below in Pinellas County, Fla., according to news reports.

Bucky, a 3-year-old pug, had joined Eric Adeson’s fur family to serve as the companion to his older dog, Sandy, who was suffering from cancer. But during a recent fight, Adeson’s girlfriend reportedly picked up the tiny dog and threw him over the balcony — plunging the innocent animal to his horrific and untimely death.

The woman reportedly had a smile on her face when she committed the fatal act of cruelty, a traumatized Adeson alleged to Fox13.  He alleged that she been drinking and using drugs prior to the incident but said he was shocked by the outcome.

“I never thought anybody could do that,” Adeson said. “I went downstairs and I hugged him, but I mean, it was seven floors.”

Authorities have arrested and charged Clearwater resident Shelley Nicole Vaughn with animal cruelty, domestic battery, and criminal mischief. She’s currently out on bail while she awaits her court proceedings.

The person who killed this innocent animal must be held accountable for their actions.

Sign our petition urging Pinellas County Prosecutor Bruce Bartlett to prosecute to the fullest extent of the law the person responsible for Bucky’s death, including a lifelong ban on owning animals and a refusal to drop the animal cruelty charge. While substance abuse counseling or a diversion program may factor into sentencing, they should not take the place of accountability in the face of fatal cruelty.