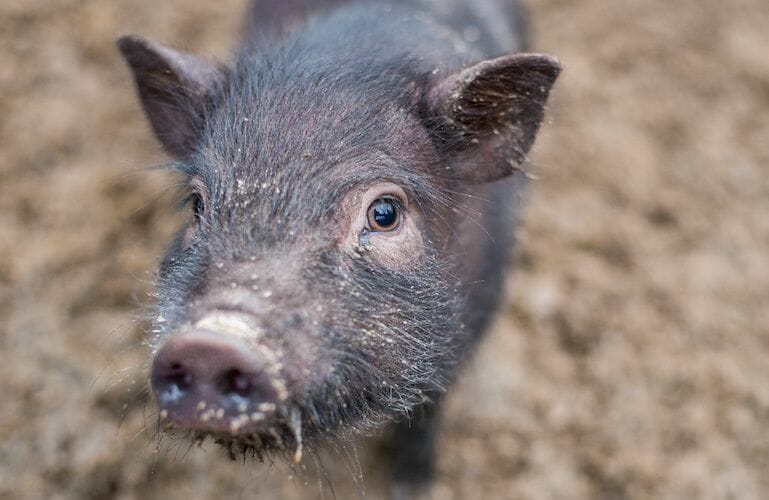 PETITION UPDATE: The court sentenced Jeffrey Cody Miller to three years in prison for a conviction of being in possession of a controlled substance while armed. The court also sentenced Miller to 180 days for violating the terms of his supervised release for the animal cruelty conviction, which will run at the same time as his other sentence. Animal cruelty charges were dropped against Ed Jesse Ramos after police claimed insufficient evidence to connect Ramos to this crime, according to news reports. —Lady Freethinker Staff

In a heartless act of cruelty, a man slaughtered and butchered his neighbor’s pet pig in Humboldt County, Northern California.

After Princess escaped from her pen, locals found the pig wandering around the neighborhood. The Arcata Police Department responded to a call and asked a nearby resident if they could keep her enclosed in their yard while they located the owner.

Less than two hours later, police returned with Princess’s guardian Cassie Hogan, only to find the resident in the process of butchering this beloved family pet.

The Hogan family raised one-year-old Princess as part of the family, bottle feeding her as a piglet. Understandably, they are devastated by this shocking act of violence.

Although the Hogan family considered her one of their own, Princess will likely be classified as livestock — or property — making hope for justice slim.

But Princess should be treated no differently than if she were a dog or a cat. She was a treasured family member who had the right to live in safety.

Sign this petition urging Humboldt County DA Maggie Fleming to prosecute the offender to the fullest extent of the law, and send a message that all animals have an equal right to protection and respect.