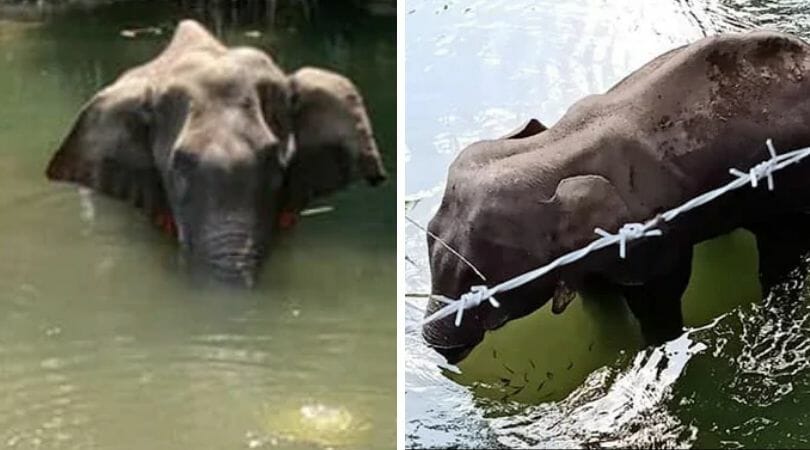 UPDATE (12/23/2021): On October 16, 2021, one of the accused, Riyazudheen, surrendered before the Munsiff Magistrate Court in Mannarkkad of Palakkad district, according to News18. His father is the prime suspect and is still at large. In other developments, a plea from a concerned advocate has caused the Supreme Court of India to look into the use of horrifying explosives and other brutal animal ‘control’ traps and weapons, like snares and shaved sticks, to ward off wildlife, according to LiveMint. We will continue to follow this case. -Lady Freethinker Staff

A pregnant elephant wandered into a village in search of food, where she reportedly ate a pineapple filled with firecrackers. The boobytrapped fruit exploded in her mouth, burning and gashing her jaw and tongue.

Desperately, she fled the village, searching for somewhere to nurse her injuries. Likely attempting to keep her fresh wounds from getting infected, the soon-to-be-mother stood in the Velliyar River in Kerala, India for several days with her trunk and face submerged under water. There she suffered in agonizing pain until she died, never able to experience the birth of her unborn child.

“She trusted everyone,” Mohan Krishnan, a devastated wildlife officier, wrote on Facebook. “When the pineapple she ate exploded, she must have been shocked not thinking of herself, but about the child she was going to give birth to in 18 to 20 months. She didn’t harm a single human being even when she ran in searing pain in the streets of the village. She didn’t crush a single home.”

This was likely a “pig cracker” meant to keep wild boars away from crops, according to BBC.  Regardless of the intended target, such animal cruelty must not be tolerated.

Innocent animals, like this pregnant elephant, must not be killed for trying to find food. Sign this petition urging the Supreme Court of India to ban deadly and inhumane animal ‘control’ methods, like explosives and snares, throughout the country and establish guidelines for cruelty-free alternatives.