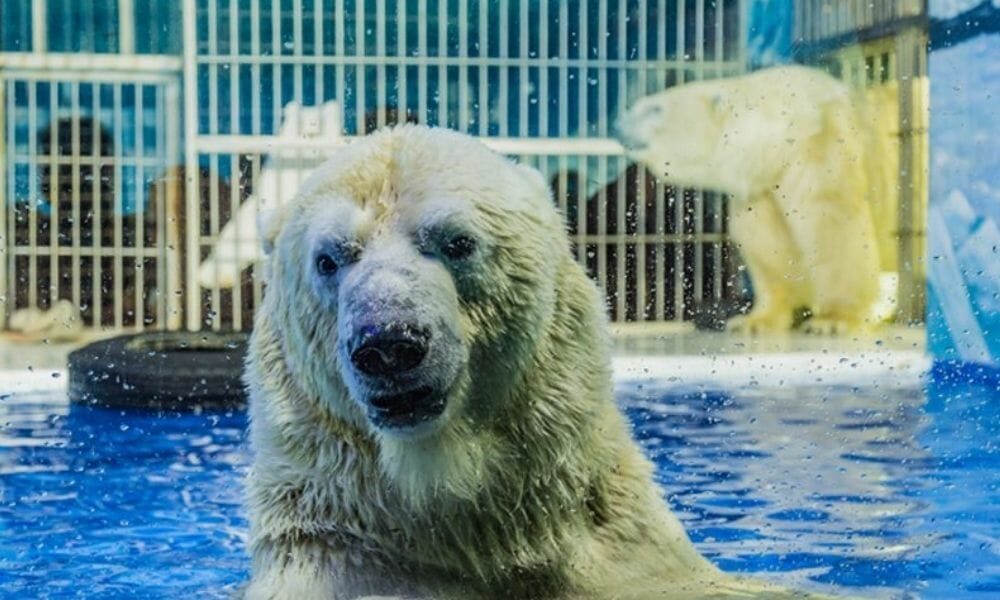 Two captive polar bears named Don Quixote and Hede are languishing under harsh lights in a tiny enclosure with fake rocks and icicles and a painted white floor in a new polar-themed park hotel in Harbin, China, the Mirror reported.

Unlike wild polar bears, they cannot roam great distances across the vast Arctic or engage in other natural behaviors.  Instead, they must endure being photographed and viewed 24/7 by visitors and hotel guests, who can peer from their rooms into the bears’ pen.

The treatment of the endangered species at Harbin Polarland, which bills itself as the “world’s first polar-themed hotel and amusement park,” has sparked worldwide outrage. Belugas, sea lions, walrus and seals also endure a life of confinement, where some are forced to perform unnatural tricks for audiences.

Wild animals are not here for our entertainment and cannot thrive in barren, artificial habitats.

Don Quixote, Hede, and all the other creatures at Harbin Polarland deserve to live in spacious habitats that are appropriate for their species, where they can engage in natural behaviors far from the eyes and cameras of tourists.

Sign this petition urging Harbin Polarland to end all animal captivity, and send the animals to a trusted sanctuary where they will live as free a life as possible.