SIGN: Justice for 32 Pelicans with Bones Broken and Mutilated Wings 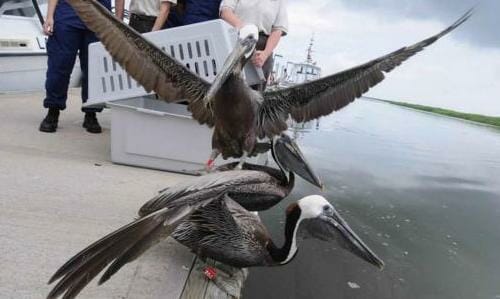 UPDATE (2/2/2023): Police did not have enough evidence to connect the pelicans’ injuries to intentional acts of human cruelty, Patrick Foy with the California Department of Fish and Wildlife told LFT. Foy said that DFW’s wildlife experts also only were able to examine a few of the bird corpses and were not able to determine any definite cause. “We tried to investigate all leads,” he said. “If there were any new evidence, any video, we would jump on that.” Thank you to everyone who signed our petition for these pelicans. We’ll keep doing all we can for animals everywhere. —Lady Freethinker Staff

Lifeguards have been discovering the injured birds for months, with many suffering from gruesome, skin-puncturing bone fractures requiring thousands of dollars of emergency surgery. The wings had been twisted as well, damaging blood vessels and nerves, said Dr. Elizabeth Wood, a veterinarian at the Wetlands and Wildlife Care Center — a local nonprofit that works with injured wildlife.

Despite their best efforts, Wood and her colleagues could only save 10 of the 32 pelicans. The remaining 22 died a painful death.

It takes a significant amount of force to break a large bird’s wing, leading center staff to agree that someone deliberately committed this crime.

Whoever is responsible for torturing these innocent birds must be found before more helpless animals are harmed or killed.

Sign this petition urging the California Department of Fish and Wildlife to use all available resources to find, cite, and charge the perpetrator(s) who performed these sadistic acts.

The Animal Legal Defense Fund also is offering an additional $20,000 reward for information leading to the arrest and conviction of the person or people responsible for attacking and mutilating dozens of brown pelicans on the coast of Orange County, California, as two more dead birds have been reported since the initial reward was announced.  The reward now totals $25,500.