SIGN: Justice for Labrador Shot Through the Head with Crossbow 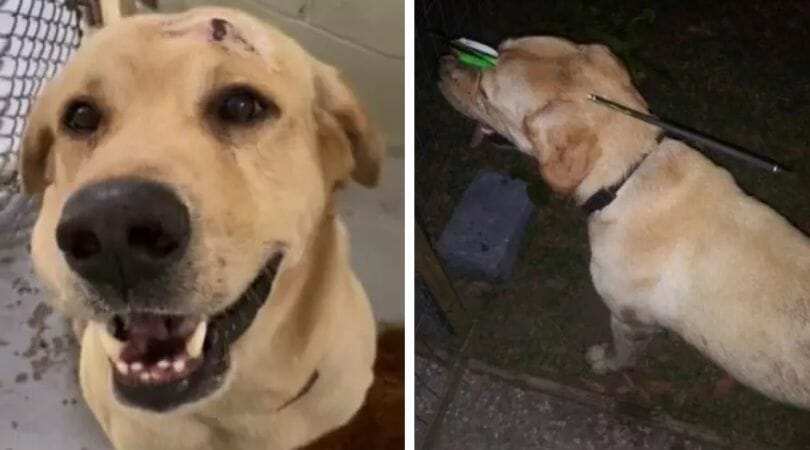 UPDATE (5/13/2021): Nassau County Resident Carey Marie Wilson has been ordered to report to the county jail tomorrow — the start of a 15 day incarceration for her choice to shoot an arrow from her crossbow into the skull of an innocent dog who walked on her yard.

Nassau County’s 4th Judicial Circuit Court convicted Wilson on one count of cruelty to animals and sentenced her to 15 days in jail and fined her $273. She’s also on probation for 12 months, which requires her to complete 200 hours of community service or “buy out” half that time, with cash given to the Nassau Humane Society. During her probation period, Wilson also is not allowed to own or operate weapons, cannot have any contact with pets other than her own and cannot adopt, purchase, or shelter any other animals.

A 15-day jail sentence for a woman who intentionally shot a living being in the head with an arrow — a potentially lethal weapon — is not justice. We are disappointed that this brutal action met with a slap on the wrist, as well as restrictions on being around animals for a single year. This woman should never be allowed have or be around animals ever again.

We thank the more than 35,800 people who signed our petition urging justice for this poor dog. We will continue fighting for more accountability for animal abusers everywhere.

An innocent Labrador barely escaped with his life after a woman allegedly shot a 16-inch arrow through his head with a crossbow in Nassau County, Fla., according to CBS Action News Jax.

Found alone in the middle of the night with the arrow’s feathered end sticking out from between his eyes and the shaft protruding from behind his ears, the dog — later nicknamed Unicorn — needed emergency care, and Animal Services staff rushed him to the BluePearl Pet Hospital.

The cruel act uprooted Unicorn’s life, with overwhelming medical costs prompting his former guardian to surrender him as he recovered at an animal shelter.

Police charged 37-year-old Carey Marie Wilson with animal cruelty for allegedly shooting the arrow at Unicorn for wandering into her yard. Wilson reportedly claimed that she only meant to scare Unicorn away, but animal control reportedly insists Wilson’s story “doesn’t add up,” as they hadn’t received any calls from her or her Hilliard address.

Shooting a potentially lethal projectile at an innocent dog is inexcusable, and Unicorn deserves justice for the pain and suffering he endured. Sign this petition urging State Attorney Melissa Nelson to prosecute the perpetrator to the fullest extent of the law.