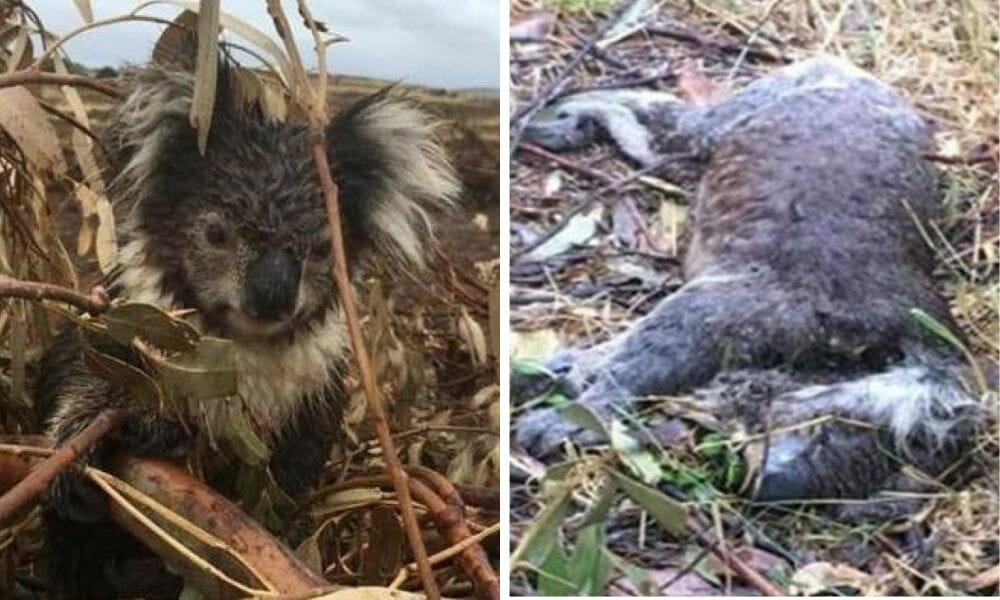 A koala trapped in the branch of a tree cut down by loggers and a koala found dead (Credit: Facebook/@AndyMeddickMP)

UPDATE (11/8/2022): The Department of Environment, Land, Water and Planning (DELWP)’s investigation into the koala massacre led to charges against the property owner and the two companies who are the co-accused. The next court proceedings are on Nov. 28, 2022, at the Portland Magistrates Court for property owner James Troeth and companies Bryants Forestry and Earthmoving Pty LTd and DR+KR Hutchinson Rural Contractors, according to court records. We’ll keep watching this case. —Lady Freethinker Staff

The corpses of 21 koalas littered an Australian timber plantation after a clear-cutting operation massacred or injured at least 70 of the protected animals and left countless others starving, orphaned, and traumatized.

The heart-breaking video of a passerby, who broke down upon discovering the lifeless marsupials at a private property in Cape Bridgewater, led to an investigation by the Victorian government.

That investigation, which included forensic radiography and pathology on the koala’s corpses, revealed 49 koalas had been euthanized as a result of injuries, including painful broken bones, dehydration, and starvation. The government announced that at least 200 animals also had been disturbed, in violation of the law.

The Victorian Conservation Regulator has issued more than 250 animal cruelty charges over the mass killing, alleging the property owner and two companies caused unreasonable pain and suffering to the koalas.

The property owner and a forest and earthmoving business each face 126 charges of animal cruelty, illegal hunting/taking/ destroying of wildlife, and aggravated cruelty that led to fatal injuries – the last of which is punishable by penalties of up to $218,088 for a business and up to $90,870 or two years imprisonment for an individual for each count.

A contracting business also has been charged with a cruelty offense for disturbing koalas, which carries penalties of up to $109,044 for a business and $45,435 or 12-months jail for an individual.

These innocent koalas, who are protected by Australian law and who are more vulnerable than ever following the 2019 wildfires that devastated their habitats and populations, deserve justice. The companies and individuals who acted so carelessly and lawlessly must be held accountable for their fatal actions.

Sign our petition urging the Victoria State Government and the Portland Magistrates Court to prosecute to the fullest extent of the law those responsible for these unconscionable koala killings before any more protected species lose their precious lives over profit.