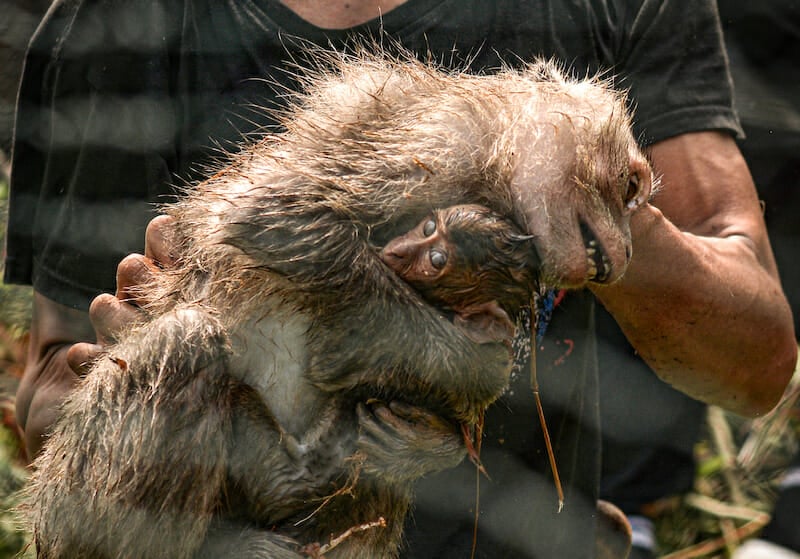 Image via Action for Primates

A wild long-tailed macaque in Indonesia struggles to flee trappers who beat him with a pole, grab and drag him by his tail, pin down his body, and then slit his throat with a machete, in a shocking video shared with Lady Freethinker (LFT) by UK-based nonprofit Action for Primates.

The disturbing footage shows trappers separating terrified infant monkeys from their distressed mothers, catching monkeys with nets and dragging them out by their tails, and stuffing monkeys headfirst into sacks or wooden crates.

As an importer of Indonesian macaques for laboratory experiments, the United States must take a stand against this brutal treatment by immediately halting all shipment of monkeys from Indonesia to the U.S.

The global populations of long-tailed macaques are decreasing. They now have the status of “Vulnerable” on the Red List of Endangered Species, following a recent  assessment by the International Union for Conservation of Nature (IUCN). 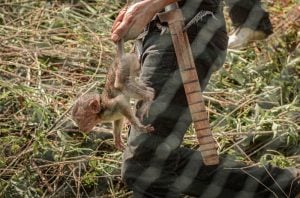 Encroachment by humans into macaque territory also has led to increased reports of negative interactions between the innocent animals and people, with authorities citing the conflict as justification for captures, AfP said.

It’s time to end the cruel and brutal treatment of these beautiful and innocent monkeys. No animal deserves to undergo brutal experiments, especially when human biology-based methods are safer, faster, and more reliable. There also are effective and more humane ways to resolve conflict with animals than resorting automatically to killing them.

Sign Lady Freethinker and Action for Primates’ petition urging the United States government to immediately end the import of monkeys from Indonesia, for research or any other purpose, to take a stance against this appalling cruelty. Then please take a moment to reach out directly to Indonesian authorities to express your concerns and to urge an end to these brutal trappings: