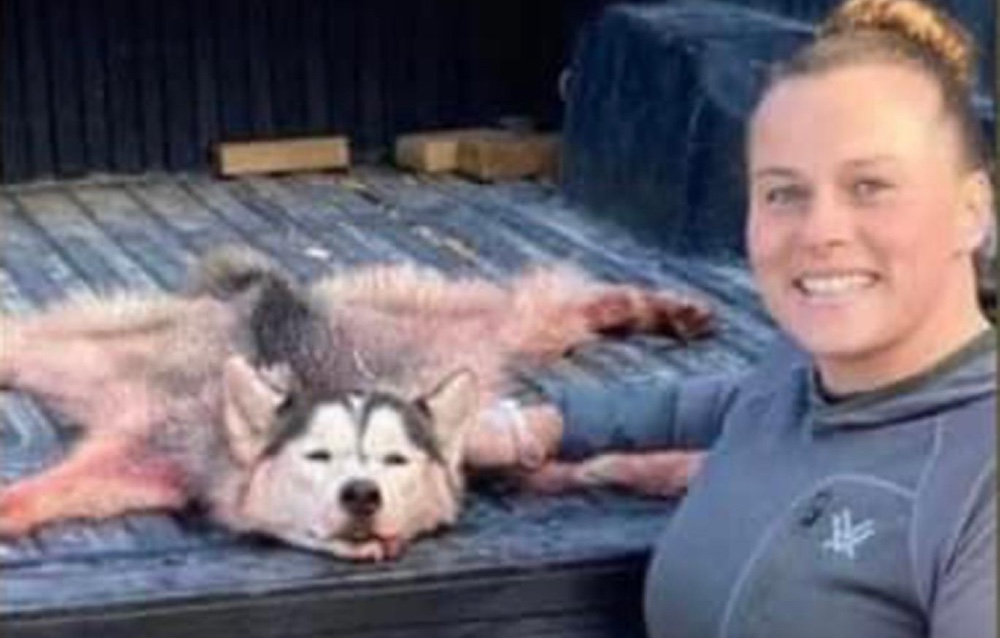 A 6-month-old Husky puppy was callously gunned down and skinned, with his lifeless body splayed across social media by a Montana woman who bragged about the brutal killing, the NY Post reported.

The puppy was one of 18 husky and shepherd mix dogs abandoned in the Flathead National Forest, according to news reports. The Facebook pictures of the slaughter show the woman smiling and clutching a rifle as she poses with the skinned fur of the deceased puppy, who she reportedly mistook for a baby wolf.

“Was a great feeling to text my man and say I just smoked a wolf pup,” the woman captioned the posted images.

The killing of the puppy sparked immediate public outrage, with many commenters noting that the puppy looked nothing like a baby wolf. Following a criminal investigation by the Flathead County Sheriff’s Office, authorities charged Amber Barnes, 36, with a misdemeanor animal cruelty charge, to which she pleaded not guilty. The maximum penalty is a year in jail and a $1,000 fine.

This puppy did not deserve to die such a gruesome, undignified death — nor do the wolves still being mercilessly persecuted in the United States.

The continued massacre of wolves — mainly in Montana, Idaho and Wyoming — helped set the stage for the senseless slaughter of this puppy. Sadly, his tragic death isn’t an isolated incident, with another beloved dog shot to death in nearby Idaho earlier this year by someone who assumed she was a wolf.

The deaths of animals — of any species — should never be glorified or considered a source of “accomplishment” or pride. The individual responsible for this heinous act must be held fully accountable.

Regardless of any reported lack of “intent,” an innocent dog — who posed a threat to no one — is now dead.

Sign our petition urging prosecutors to treat this case with the severity it deserves, including ensuring the animal cruelty charges remain on the record and requiring restitution to an animal welfare or conservation organization.