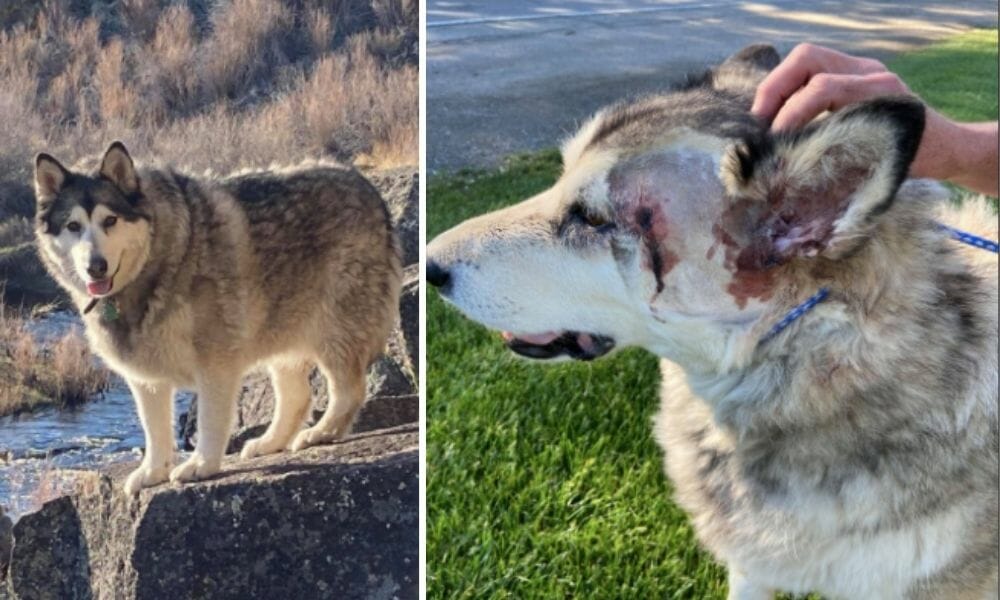 Suki, a loyal 6-year-old Alaskan Malamute, was shot twice during a family backpacking trip after a group of neighboring campers mistook her for a wolf.

The first .44 caliber bullet entered between her ear and eye before exiting through the back of her head. The second bullet clipped her ear.

Suki’s guardian, Robert Kolb, found her bleeding, panting, and prostrated on the ground in front of the shooter and two other men after the gunshots awakened him and his 16-year-old daughter, who was on her first backpacking trip.

“I screamed, ‘How could you shoot my dog?,’ and they again said they thought she was a wolf,” Kolb told KBOI. “It has crushed our family to have gone through this.”

The loyal dog hiked three and a half miles back to the trailhead, covering more than a 1,200 elevation gain, to receive emergency care at the St. Francis Pet Clinic.

Shrapnel remains in her left side. She’s lost part of her ear. She has a cracked vertebrae, and the left side of her face is paralyzed. But she has survived, KMVT reported.

Kolb told KMVT that he had chosen North Fork Lake in Custer County because the area wasn’t known for hunting. The lake also was a special spot he wanted to show his daughter. Kolb said he hadn’t kept Suki leashed because he didn’t realize the other campground was so close.

While Suki is recovering, Kolb said he is worried that more innocent dogs might die or be injured after the state’s wolf-related laws change in July. The controversial laws, effective July 1, will allow private contractors to kill wolves on private lands year round, with no limit on the number of wolves they can massacre. The laws also allow hunters to shoot wolves from motorized parachutes, ATVs, or snowmobiles.

The Wood River Wolf Project — a collaborative community effort to establish peaceful co-existence with wolves — is encouraging people to outfit their companion animals with reflective vests for their animals’ safety while in the backcountry.

But Kolb told KMVT he won’t be hiking after July with Suki, who he said doesn’t much resemble a wolf as an “obese” 104-pound dog wearing a collar and tags.

“I am not going to take my dog in the woods anymore after July when they are allowing hunters to kill wolves,” he said. “I am going to keep my dog at home.”

Dog guardians shouldn’t have to live in fear that their companions will get shot or harmed while enjoying a peaceful romp through the woods.

Wolves also shouldn’t be massacred with brutal methods and no kill limits. If you haven’t already, please sign Lady Freethinker’s petition urging the federal government to put an end to these senseless and inhumane laws.