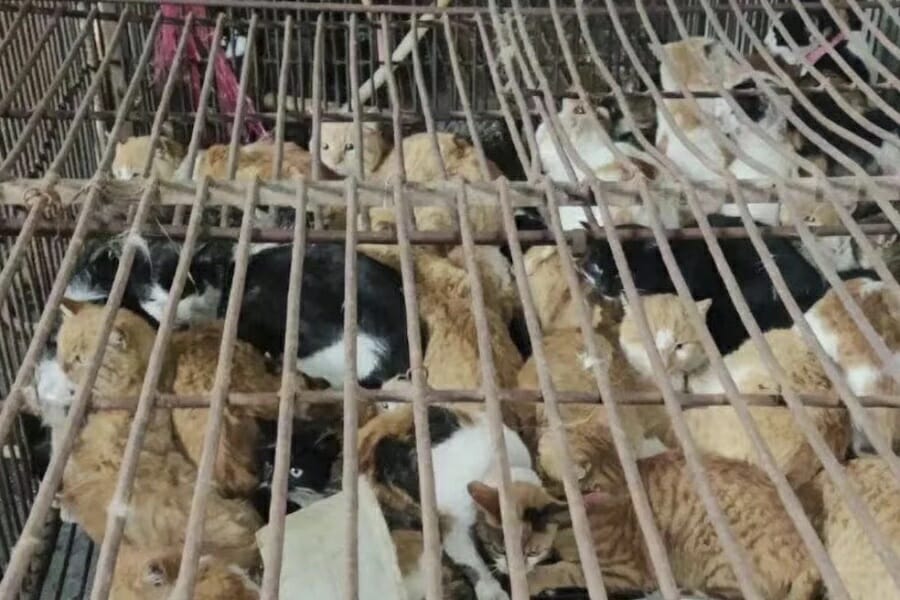 Snatched from a loving family’s Shanghai home, a defenseless cat ended up at an alleged dog and cat meat market, where more than 300 dogs and cats — including stolen family pets still wearing their collars — were crammed into filthy cages while awaiting slaughter, according to South Morning China Post.

Acting on a tip about suspected animal cruelty, authorities raided the Yuanhui Livestock Trade Market in Jiangmen, China, after the missing cat’s guardian traced the animal’s location using a GPS.

There, they found tools commonly used for slaughter and also noticed an overwhelming and putrid odor.

Jiangmen police say they cannot yet prove that the shop owners planned to butcher the dogs and cats,  with investigations reportedly ongoing, The Beijing News reported.

Despite growing widespread sentiments against China’s dog and cat meat trade, there is no national ban on this gruesome industry, leaving innocent strays with little legal protection.

But stealing pets is a crime in the country, and it is imperative that whoever illegally acquired this family cat is charged accordingly.

Sign this petition urging Chinese Ambassador Cui Tiankai to push for a thorough investigation and swift action against anyone suspected of trafficking family dogs and cats in this appalling case.