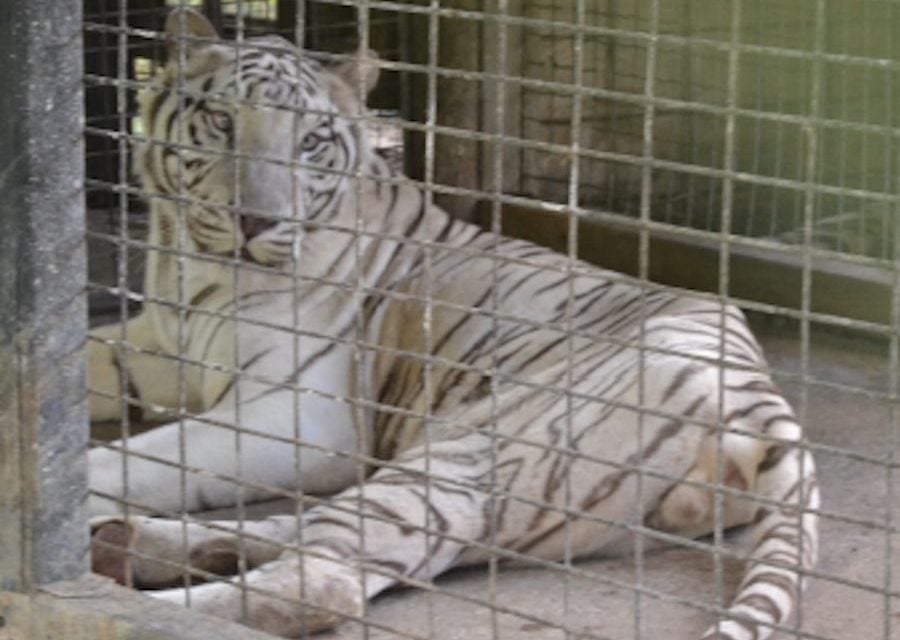 UPDATE (8/22/2022): Lady Freethinker submitted a request for an immediate animal welfare check to Robert Mullen’s property in Bell, Florida, and received an agency response that they’d be looking into the concerns as quickly as possible, with results accessible with a Freedom of Information (FOI) request in 30-60 days. We’ll plan on following up with the USDA then. —Lady Freethinker Staff

Emaciated, parasite-ridden tigers at a roadside exhibit in Florida slid under the radar of the U.S. Department of Agriculture and likely would have continued to suffer had state inspectors not stepped in and ordered their surrender, according to public records documents obtained by Lady Freethinker.

USDA licensed exhibitor Robert Mullen forced his tigers to perform for years at state fairs before he retired them to enclosures that documents show didn’t meet Florida’s minimum animal welfare standards. He also slaughtered horses to feed them and supplemented their diets with roadkill and poor quality meat castaway from another licensee, according to documents obtained from the Florida Fish and Wildlife Conservation Commission (FWC).

Tragically, FWC inspectors also noted two tigers who repeatedly suffered from internal parasite infestations and who were thin to the point of emaciation, with one tiger losing up to 20 pounds between state site inspections, according to body camera footage obtained by Lady Freethinker via public records request.

Meanwhile, dozens of other animals also suffered – including a ring-tailed lemur with open wounds on his body, parrots kept in cages coated with fecal waste and grime, dozens of animals who burned to death in a trailer structure fire, and a kinkajou, coati, capuchin monkey, and ferret kept in cages that didn’t meet Florida’s minimum size standards, according to public records documents.

Records from the USDA, the federal agency mandated to oversee the well-being of animals held by their licensees, show none of this.  Inspections from 2016, 2017, and 2018, in which the inspector clearly included Mullen’s two tigers in the animal inventory, note “no noncompliant issues.” Although USDA inspectors are mandated to inspect licensees at least once a year, the federal agency’s last inspection of Mullen’s property was in March 2020.

While Mullen is no longer allowed to keep big cats, thanks to state action, his active license with the USDA means that he could still be keeping other animals – and that those animals’ welfare has not been noted by the federal agency in at least two years, according to USDA records.

The USDA absolutely must send an inspector out to this property as soon as possible to ensure that this active licensee is operating within mandated federal animal welfare laws.

Then, you can read Lady Freethinker’s full story here.