Exhibitor With Emaciated, Parasite-Ridden Tigers Hasn’t Been Inspected By USDA in Years

A former performer who allowed several of his tigers to become emaciated and parasite ridden – to the point where state authorities ordered their surrender, or criminal charges – still has an active license with the U.S. Department of Agriculture (USDA) and hasn’t been inspected by that federal agency for years, according to USDA reports.

Exhibitor Robert Mullen, based in Bell, Florida, ran a traveling show with big cats for years under a USDA license before concerns surfaced in 2016 at the Missouri State Fair about Mullen’s “skeleton” tigers. That incident followed reports from years earlier, when the International Fund for Animal Welfare publicized a video of a trainer dragging a big cat by the neck and voiced concerns that animals’ needs couldn’t be met in a traveling show, according to news reports.

Mullen then retired his big cats, keeping them in enclosures at his property in Bell where he told inspectors he ran “Open Houses” in order to meet the “commercial” requirements for keeping tigers, who can’t be kept by law as “pets.”

USDA records from 2014 onward show nothing about the conditions for the big cats. In fact, they don’t show much at all, with seven of 10 inspections from 2017 onward attempted – but not actually conducted –  because Mullen wasn’t there to show someone around, according to inspection reports.

Mullen’s last inspection by the USDA was in March 2020, according to USDA records, although his USDA license is listed as active through September 24, 2022 and inspectors are required to inspect a licensed facility at least once each year.

Meanwhile, records from the Florida Fish and Wildlife Conservation Commission (FWC) tell a tragic tale of Mullen’s big cats, first forced to perform to entertain fairgoers and then retired to enclosures where they were fed slaughtered horse, roadkill, and “poor quality” meat castaway from another licensed facility, and where they were left to languish ridden with repeated infestations of parasites.

Several nonprofit animal welfare groups raised the alarm following the 2016 Missouri State Fair, after complaints poured in regarding Mullen’s “apparently emaciated tigers” and “skeleton” cats who had been forced to perform.

One citizen petition demanding an investigation into the “skeleton tigers” amassed more than 162, 600 signatures, while the nonprofit Animal Legal Defense Fund launched a campaign to the USDA to revoke Mullen’s traveling license.

News from the time, however, reported that a veterinarian had determined the tigers were “healthy,” and quoted Mullen as saying, “They’re treated just like my family… They get better healthcare than you or I get, I guarantee it.” 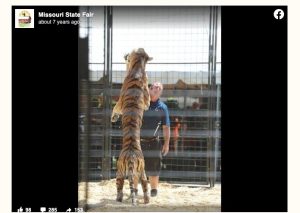 What followed was Mullen wracking up warnings and violations of captive wildlife codes with state officials.

In 2016, the FWC officially warned Mullen for failing to maintain captive wildlife in appropriate enclosures and for unsanitary conditions and substandard size caging.

A December visit also showed a tiger cage that wasn’t structurally sound, was lacking a platform for needed enrichment, and had excessive food and fecal waste – conditions that also were noted during inspections early into 2017.

From there it got worse. 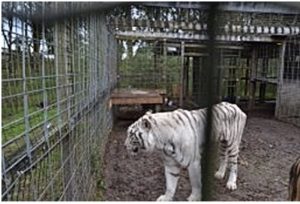 Inspectors in 2018 documented multiple criminal violations at Mullen’s Class 1 Big Cat facility: including second degree criminal violations of codes pertaining to wildlife as personal pets, maintaining wildlife in unsafe and unsanitary conditions, cage sizing requirements and keeping captive wildlife “in a manner which results in the maltreatment or neglect of such wildlife.”

FWC inspectors noted that two tigers were very thin and that Mullen reportedly was slaughtering horses, picking up roadkill, and getting “poor quality meat including necks, hamburgers and pork” to feed them, according to the inspection report.

When the inspector asked about the thin tigers, Mullen said they had lost muscle because he no longer performed with them, to which the inspector replies that most animals who are inactive “would get fat, not skinny, from lack of exercise,” according to the inspection report. 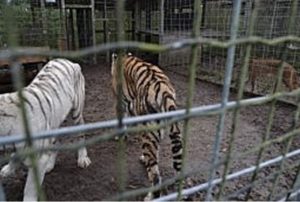 Mullen also tells the inspector that his specific cats have a genetic disposition to be thin due to inbreeding, to which the inspector notes he’s inspected tigers from the same lineage at a different property who had no trouble maintaining a healthy weight, according to the inspection report.

Body camera footage obtained by Lady Freethinker via public records request also shows an inspector quizzing Mullen on his tigers’ consistently being infected with roundworms – with one tiger losing a reported 20 pounds between visits.

The inspector also asked Mullen how he used his big cats for commercial use, as Florida does not allow people to keep tigers as “pets.” Mullen said he hosts Open Houses for the public, to which the inspector told him the facility was “not in a presentable condition to hold open houses.”

The inspector also echoed what Secretary of State records show: That Mullen’s official business – PM Productions – had been inactive since 2016.

In 2019, the state agency denied Mullen’s application to possess endangered species, noting that Mullen had submitted inaccurate and falsified information of how he used his tigers and also that there were “Multiple health issues” that needed to be addressed. 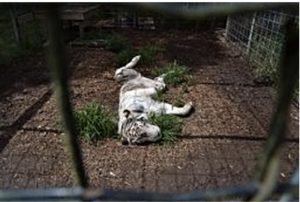 Inspectors in 2019 documented additional caging violations, a damaged and rusted lock-out in a tiger cage that could serve as an escape route, and tigers with a body condition of 2 – meaning “Both tigers hip bones protruded and the abdomen had a tucked appearance.”

The inspector also noted the tigers “were lethargic with a slow and deliberate gait” – and that the conditions, including a “history of internal parasites,” had spanned multiple inspections, according to the report.

“The cats have had persistent roundworm infections,” the inspector wrote. “The tigers fluctuated in weight from near emaciation to thin, but they never gained optimal body condition…. This weight fluctuation demonstrates lack of sufficient nutrition. Whether this was the result of under feeding or persistent internal parasite load, it was the responsibility of R. Mullen to properly care for the cats.”

In addition to feeding the tigers poor quality meat, Mullen also was fasting the cats once a week – a practice the inspector noted was completely inappropriate given their thinness.

A settlement agreement between Mullen and the State of Florida, obtained via public records request, shows that Mullen was ordered to surrender his big cats and would never again be allowed to own Class I or II wildlife.

But the tragedy doesn’t end with Mullen’s big cats.

Tragic Deaths for Other Animals 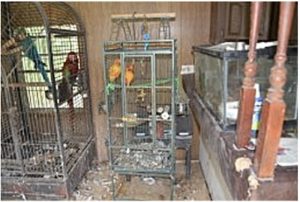 Inspection reports from the FWC indicate a kinkajou, coati, capuchin monkey, and ferret kept in cages that didn’t meet minimum size standards. Other outdoor cages were overgrown with weeds, while indoor python and parrot cages had excessive waste and filth, according to inspection reports. 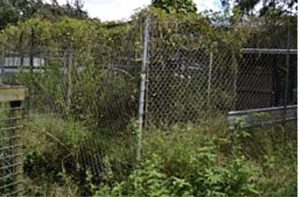 “All the indoor cages with the exception of the cage housing the American Alligator were unclean,” the inspector wrote. “Fecal waste and grime were observed on surfaces on the cages including walls, cage wire, perches, and toys.”

A ring-tail lemur also was noted with “multiple open wounds, particularly on the legs” – which Mullen reported was an “ongoing medical condition causing skin ulcers” although the inspector had not seen the animal with the issue and also noted in his report that Mullen “did not send me any vet records.”

Then, in January 2021, a structure fire likely caused by faulty wiring killed an estimated 30 exotic animals kept in cages inside a trailer on Mullen’s property, according to records from the FWC and the Gilchrist County Sheriff. 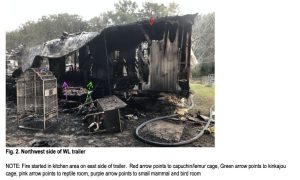 Investigators found the trailer’s wiring was “not up to code and too small” and that only a handful of birds and a fishing cat, kept in outside cages, survived.

The FWC inspector who viewed Mullen’s emaciated big cats wrote in a corresponding report that he had provided documentation to the USDA, including photographs, and that he was “advised a USDA Big Cat Specialist was concerned about the tigers, stating the white tiger was close to being critically underweight.”

“I was advised USDA would also follow-up on the welfare of the tiger,” the FWC inspector added.

While USDA inspectors are required to inspect licensees at least once a year, the last time the federal agency attempted to inspect Mullen was in March 2020, according to the public inspections portal to which the USDA directed Lady Freethinker, when inspectors noted two violations of the minimum standards in the Animal Welfare Act for jagged holes in the dog trailer and disrepair in a llama enclosure.

During that site inspection, Mullen had 8 dogs, six goats, five cats, one llama, one ring-tailed lemur, one rabbit, one kinkajou, one fishing cat, one brown capuchin and two pigs, according to the most recently available inspection report.

The last successful inspection before that one – meaning an inspector from the USDA’s Animal and Plant Health Inspection Service (APHIS) was able to tour the facility – was September 2018, when inspectors identified eight issues they determined “teachable moments” that were not immediately available online. Lady Freethinker has an additional public records request out for those infractions. The report, which does not identify any outright violations, does include two tigers in the included animal inventory.

Otherwise, Mullen’s history with the USDA shows inspectors attempting – but not actually conducting – inspections, with seven reports (five of which were consecutive) since 2014 showing that APHIS inspectors couldn’t access the property because Mullen was not there to take them around.

Federal inspectors noted no noncompliance during inspections in August 2015, August 2016, and November 2017 — with those reports also clearly indicating in the animal inventory the two tigers who were cited so differently in the FWC reports. 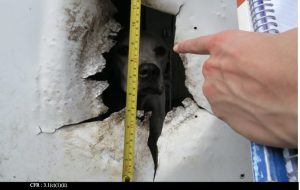 A site inspection at Robert Mullen’s property (Courtesy of USDA)

Lady Freethinker would like to remind our readers that while zoos or performances involving animals may seem “fun” or harmless on the surface, the animals involved often suffer.

We strongly urge everyone to choose animal-free “entertainment” options instead, to boycott venues that host entertainment acts involving animals, and also to write to organizers to inform them about why animal “entertainment” is inhumane and to politely request that the venue refrain from hosting such acts in the future.

You can also sign our petition, urging the FWC and the USDA to conduct an investigation as soon as possible at Robert Mullen’s property in Bell to ensure any remaining animals are safe and that any additional violations meet with immediate penalties and corrective action. 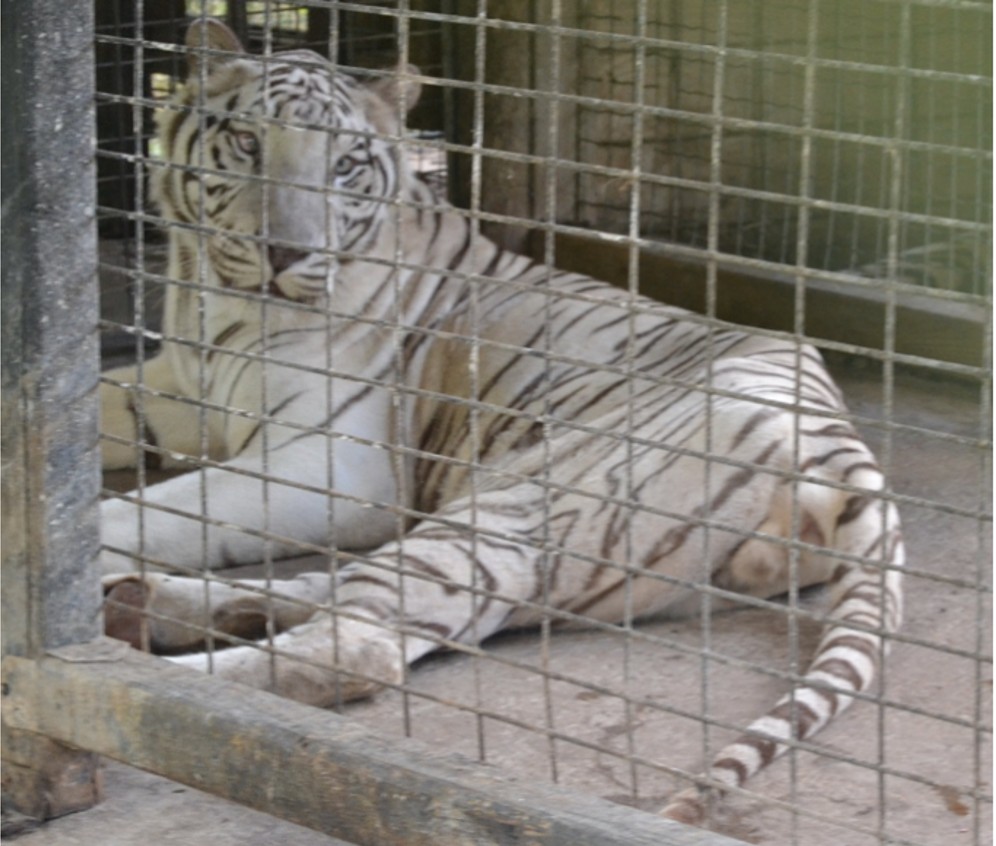