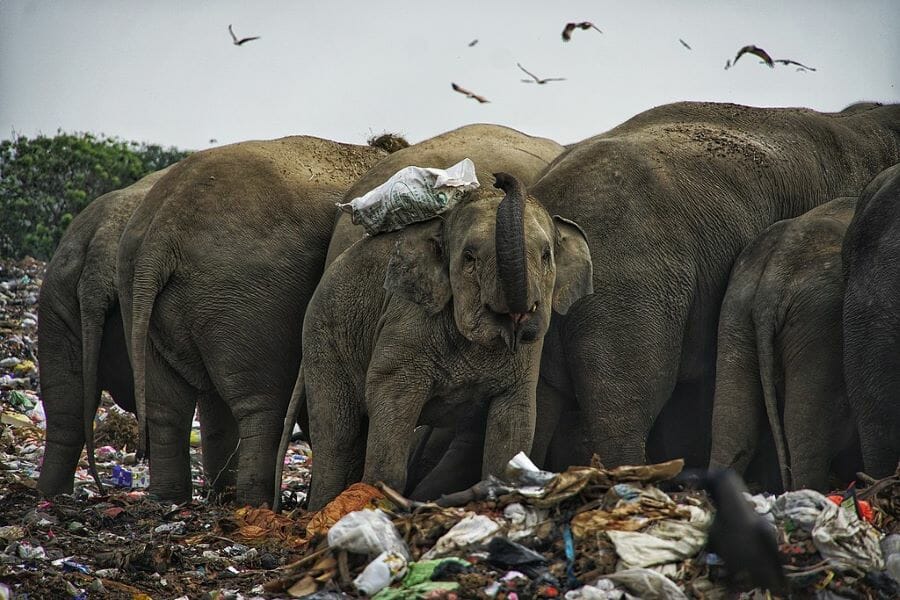 Two more elephants are dead after eating plastic while foraging for food at an open landfill in Sri Lanka.

Autopsies done at the waste management site in Pallakkadu, eastern Sri Lanka, revealed the animals had swallowed large amounts of non-biodegradable plastic — including polythene, food wrappers, and other non-digestible items.  Their deaths bring the total number of elephants to die from consuming plastic waste at landfills in the country to 20 dead elephants since 2014.

Lightning damaged the electric fence that secured the Pallakkadu site in 2014, leading elephants to rummage through the landfill at will. While the government announced in 2017 that they would erect new fences and recycle the garbage in dumps near wildlife zones to prevent elephants from consuming plastic waste — that obviously hasn’t happened.

Elephants that accidentally eat plastic suffer and often die as a result. Once swallowed, the plastic fills the stomach and can block the gastrointestinal tract altogether. Plastic debris that is coated with food waste, such as that found at landfills, has an increased chance of being mistaken for food.

The Sri Lankan government must follow through on its promises to protect these innocent animals, which are both an  endangered and revered species by the country’s people. No more innocent elephants should needlessly and painfully die by eating toxic trash.

Sign this petition urging the Sri Lankan Government and Ambassador to the United States Ravinatha P. Aryasinha to urge his government to protect the vulnerable and dwindling elephant population by completing these critical mitigation efforts.