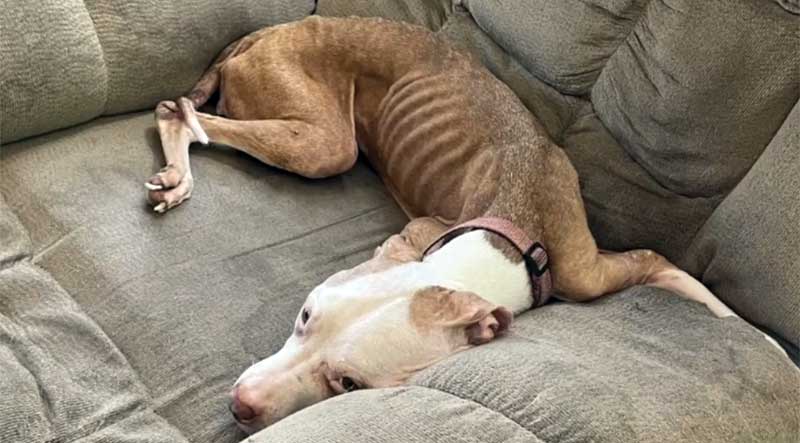 UPDATE (11/3/2022): Joseph Alex Farkas has a hearing on Nov. 14 and a docket sounding on Dec. 2, according to court records. We’ll keep watching this case. —Lady Freethinker Staff

Two paralyzed dogs were starved nearly to death and left to wallow in puddles of their own urine before authorities confiscated them in Florida.

Deputies from the Brevard County Sheriff’s Office, acting on a tip from a concerned citizen, rescued dogs Darcy and Katie — just before they would have succumbed to a month of torturous starvation — and rushed the dogs to emergency medical care, according to news reports.

Veterinary exams revealed the intentional neglect caused Darcy to become paralyzed and also that the devastated dog was in an advanced state of hypovolemic shock — with her organs shutting down, her heart unable to circulate blood and her death imminent when rescuers arrived, news reported.

The intentional starvation also paralyzed Katie, leaving her pinned to the floor for several days in puddles of her own urine that scalded her, according to the local sheriff and the veterinarian who treated her.

Authorities have charged Joseph Alex Farkas with two third-degree felony counts of animal cruelty and two first-degree misdemeanor counts of cruelty for confinement without sufficient food, according to news reports. Investigators added that Farkas reportedly left a sealed bag of dog food in direct view of the helpless animals.

While both dogs are now recovering, thanks to the caring and quick action of their rescuers, they never should have had to endure this horrific ordeal and the person(s) responsible must be held accountable.

Sign our petition urging Brevard County prosecutors to treat this case of blatant animal cruelty with the severity it deserves, including a lifelong ban on owning animals and any needed intervention services such as anger management or psychological counseling to help prevent future acts of animal cruelty.