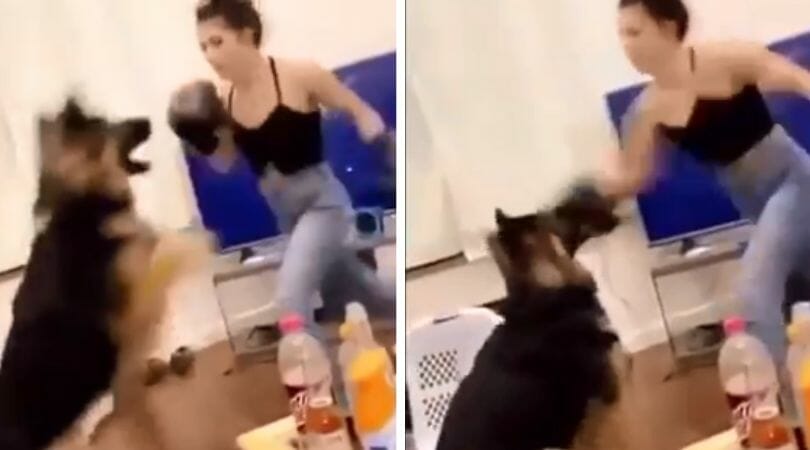 UPDATE (07/24/20): Prosecutors declined to press charges against the woman seen boxing a German shepherd, citing insufficient evidence. We are very disappointed in the outcome of this case, and now more than ever, we must continue to advocate for all animals.

In a sickening video posted on Snapchat, a German shepherd cried out in pain as he was punched in the face over and over by a woman wearing boxing gloves in Eagle, Idaho.

“I hit him so hard, I felt that through –” the attacker said, as the video abruptly ends.

As the suspect repeatedly struck the visibly terrified canine, someone in the background made a taunting statement against animal lovers and laughed.

“We’re boxing animals. Where’s Sarah McLachlan?” the onlooker snidely remarked, referencing the popular singer and animal rights activist, before erupting into laughter at the violence unfolding before his eyes.

Disturbed viewers are overwhelmingly responding to the horrifying clip, which went viral on social media, with demands for justice. The suspect could face an animal abuse charge, Idaho Humane Society spokesperson Kristine Schellhaas told the Idaho Statesman, but for now, the case sits on the prosecutor’s desk, awaiting a decision.

The person who beat this innocent dog in an obvious display of cruelty must not get away with their actions. Sign this petition urging Ada County Prosecutor Jan M. Bennetts to charge the perpetrator for their suspected crimes, and to prosecute them to the fullest extent of the law.