SIGN: Justice for Dog Covered in Puncture Wounds and Dumped in Bushes 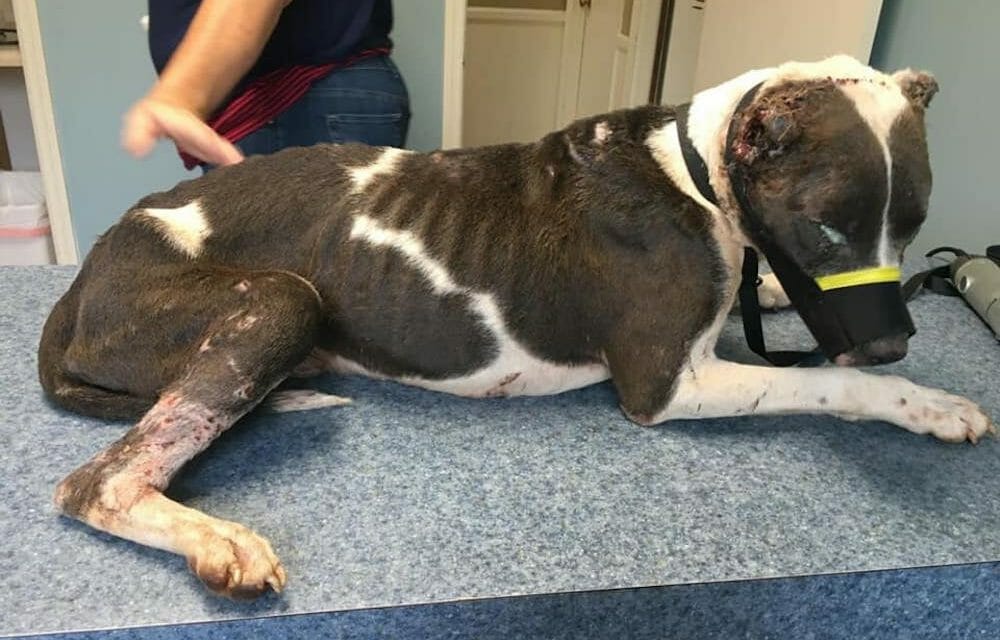 “He was diagnosed with inoperable cancer, but he is living happily in his wonderful foster home,” the rescue said.

Abbeville County Animal Services followed a couple of tips and leads, but no one was linked to the case.

“Unfortunately, no one was found to be linked to the horrible things that happened to Soldier,” said Jessica Bridges, Director of Abbeville County Animal Services.

While we are disappointed that no one was held accountable for this atrocious act, we are so grateful that Soldier is in better hands and grateful to every one who is helping with his recovery.

Found abused and neglected with infected puncture wounds covering his body, a severely dehydrated and emaciated dog fought for his life after being dumped in the bushes in Calhoun Falls, S.C.

With pus-filled eyes, torn ears cropped to the scalp, bones nearly sticking out of his body, and parasites covering his lacerations, it’s believed the dog sustained his injuries in an illegal dog fighting operation, according to Abbeville County Animal Services.

Named Soldier because of the war he went through, the pup will be taken to Auction for a Kaws Rescue when he is in stable condition. The Abbeville County Animal Services posted gruesome photos of his horrifying wounds on Facebook.

We must speak out to ensure that innocent dogs like Soldier are not used and abused for a horrific and illegal bloodsport. Dogfighting cannot be tolerated.

Sign this petition urging Abbeville County Sheriff Ray Watson to use all available resources to fully investigate this barbaric case of animal cruelty and find the culprit(s) responsible for such a horrific crime, potentially saving the lives of other abused dogs.

This is an ongoing investigation. Anyone with information is asked to contact 864-366-2403 or 911. The Humane Society of the United States is offering a $5,000 reward upon the conviction of a reported dog fighter.