SIGN: Justice for Chickens Tossed Off Roof at Cruel Festival 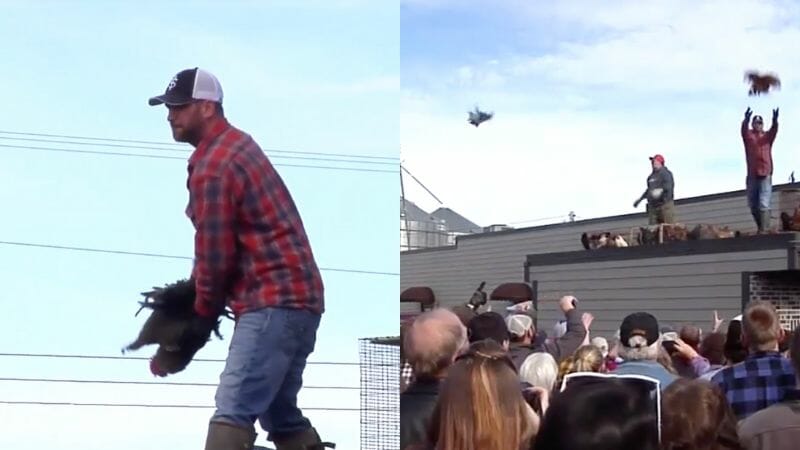 UPDATE (11/8/2021): Farm Bird Sanctuary sued the city of Ridgeland in 2020, citing Wisconsin’s animal cruelty laws and asking a judge to issue an emergency injunction to stop the annual Pioneer Day chicken toss.  The judge declined, due to the short time frame between the request and event and asked Farm Bird Sanctuary to re-file, according to Veg News.

Quincy Markowitz, with Farm Bird Sanctuary, told Lady Freethinker that they aren’t planning to attend Pioneer Days in 2022 due to COVID-19 concerns. But they’re also not going to let the issue drop.

“We are looking into pursuing legislative action as our next step,” Markowitz said.

Hundreds of terrified chickens are hurled from a rooftop into a crowd of people and greased-up pigs are chased and wrestled to the ground at the cruel annual Pioneer Day festival in Ridgeland, Wis., which has been abusing terrified animals for over 35 years.

The event organizers suggest the animals aren’t harmed during the festival, but falling from a rooftop into the grasping hands of hundreds of people is a frightening experience for these chickens and can cause them significant physical harm. From broken bones to stress-induced heart attacks, the birds involved the “chicken toss” are brutally exploited for entertainment.

Pigs desperately attempt to avoid being tackled by large groups of people, and similar to the chicken toss, the “greased pig catching” event is inhumane and harmful to the animals’ health.

Popular among children, these events teach impressionable young minds that harming animals is something to celebrate.

Activists have protested the festival for years, but so far, their outcries have fallen on deaf ears. It’s time to ensure our voices are heard by demanding an end to this barbaric event.

Sign this petition urging Dunn County Sheriff Kevin Bygd to intervene and take action against the abuse of chickens and pigs at this awful event.