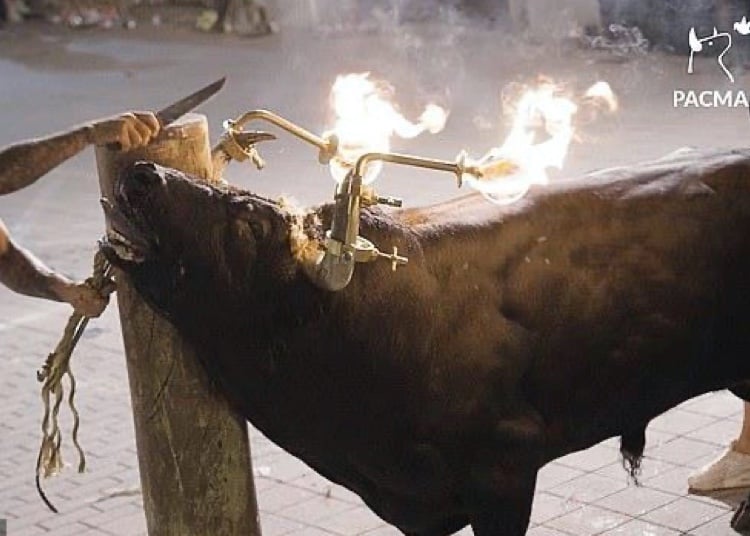 A wailing, terrified bull was tied to a post while men forcibly attached flaming torches to his horns during a recent bull running “festival” in Spain, The Daily Mail reported.

The disoriented animal moaned and bucked before he was released and raced through the streets after taunting festival goers, according to the Elrisala-East Post.

These torturous events reportedly take place all over the country in the name of Spanish culture, which unfortunately results in brutalized bulls and often dead or severely injured human festival participants.

Days before the Spanish political party PACMA released the alarming video footage, a 24-year-old man was killed after a frightened, frenzied bull with flaming horns gored and trampled him, according to the Daily Mail.

A few years prior, a bull slated for use in the event fell into a ravine after escaping his enclosure and charged at a man sitting on a nearby fence, Newsweek reported. One person was injured during the 9-hour effort to get the bull out of the ravine.

Large-scale protests in the national capital Madrid have called for a nationwide ban on bull running events — as has PACMA.

“These events are based on extreme cruelty and violence and, as such, are an authentic torture for animals and a huge danger to all people,” PACMA said in a statement. “This is about archaic traditions that foment violence and poison society.”

Sign our petition calling on the Prime Minister of Spain to enact a nationwide ban on cruel bull running, including the traumatic spectacle of attaching flaming torches to their horns.