SIGN: Justice for 6 Dogs Killed and Dumped Near Campground 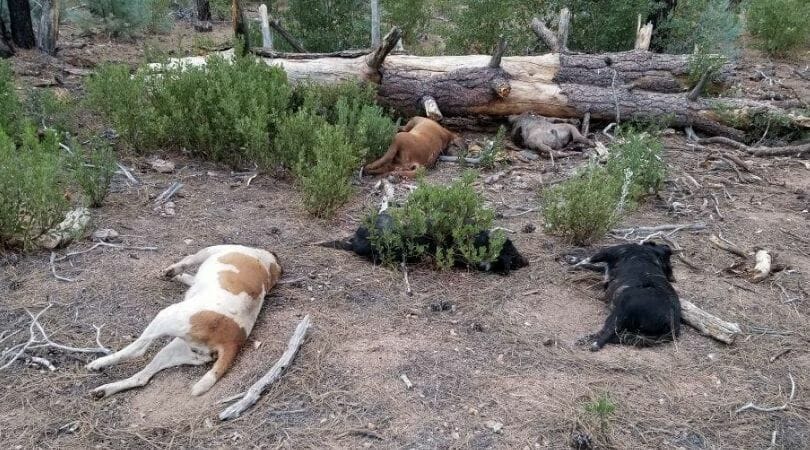 UPDATE (3/28/2022): The Gila County Sheriff’s Office informed us that there are no suspects and no leads in this case.  Although we are saddened that no one was held accountable for this act, we thank the more than 32,500 people who signed our petition demanding a thorough investigation. We’ll keep doing all we can for the animals. —Lady Freethinker Staff

Killed and dumped like trash in a Payson, Ariz. forest, five adult dogs and one puppy were discovered by campers who smelled their decomposing carcasses from a nearby campground, according to Deputy Chris Sanks of the Gila County Sheriff’s Office.

Several of the lifeless dogs appeared to have been shot, and drag marks led authorities to believe that they died somewhere else before someone disposed of them in the woods.

Based on the decomposition, the dogs, who were not microchipped or wearing tags, were likely discarded several days before locals made the grisly discovery, which has left the community both baffled and outraged.

Nearby, law enforcement discovered the skeletal remains of what is believed to be another dog. The cause of death, and whether the animal is somehow connected with the recently dumped bodies, is unknown, according to Sanks.

Whoever is responsible for the death of these dogs must answer for their actions before any more innocent animals are harmed or killed.

Sign this petition urging the Gila County Sheriff’s Office to use all available resources to identify and charge the individual(s) behind this disturbing act of cruelty.

This is an ongoing investigation. Anyone with information is urged to call the Gila County Sheriff’s Office at 928-474-2208.