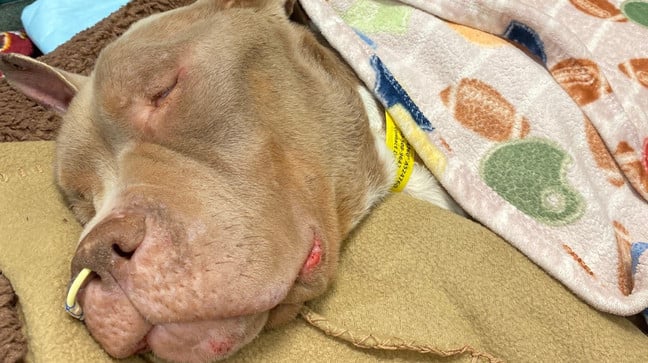 Major, a beloved canine companion, now reportedly is fighting for his life after officials seized him and 20 other emaciated dogs from an unlicensed kennel in Maryland, according to news reports.

“You can see every single bone in his body,” Major’s distraught guardian told Fox45 News. “He could barely hold his head up. He couldn’t even open his eyes.”

The emaciated dogs had no access to food or water, according to officials with Prince George’s County Animal Control who followed up on tips from concerned residents and a local veterinary hospital.  The dogs needed immediate medical care at animal hospitals before they could be transferred to county animal services, where they are receiving additional care.

As part of an ongoing investigation, they cannot be adopted or fostered – meaning they likely now also face a long waiting period as the case moves through the system before they can ever find the loving forever homes they deserve.

Officials have charged Tristian Taylor, owner of Taylormade K9s or the Bark Base Kennel, with animal cruelty and theft. Taylor, in a public apology, said the situation was “very complicated” and blamed the documented neglect on a kennel tech and other business priorities that he said had prevented him from conducting proper oversight of his facility, according to news reports.

Whoever is responsible for this atrocious neglect and suffering must be held fully accountable. This dangerous – and possibly deadly – cruelty must be treated with the severity it deserves.

Sign our petition urging Prince George’s County Animal Control to thoroughly investigate this abuse and for the prosecutor to treat this case with the severity it deserves – including a lifelong ban on owning animals for everyone responsible.