SIGN: Justice for Dogs Brutalized for Dogfighting in Chile 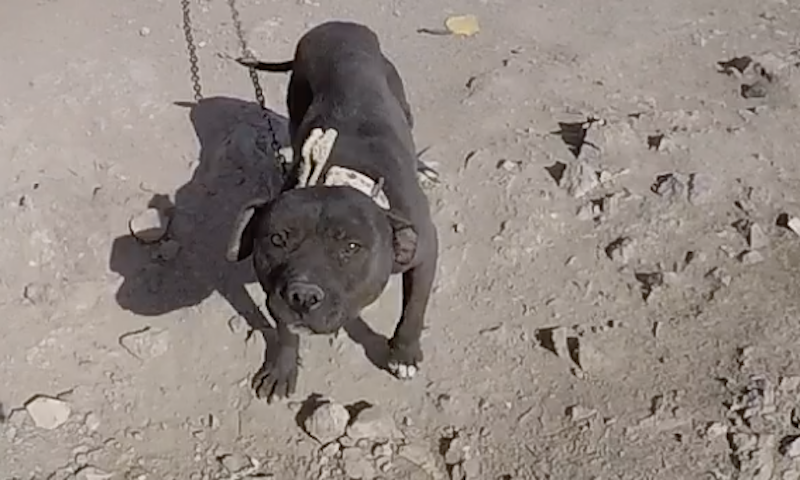 History was made when the judge handed down the highest animal cruelty sentence ever achieved in Chile: the maximum sentence of three years imprisonment, the maximum fine possible of 3 Monthly Tax Units, and a lifelong ban on the defendant ever having an animal in his possession again.

“It is the first conviction achieved here in the San Felipe Prosecutor’s Office regarding the crime of animal abuse resulting in death,” said Prosecutor Palacios Bobadilla, in a press release. “For animal groups, a precedent is set regarding animal abuse.”

The conditions were sickening: 21 dogs were ill, weak and starving when a Lady Freethinker investigator discovered them on the property of alleged illegal dog breeder and known dogfight organizer Gonzalo Ariel Rebolledo Robles near Santiago, Chile in late July.

Kept on short, heavy chains or in small, filthy kennels with no food or water, their empty bowls were coated in green slime. Three dogs were already dead, their bodies decomposing on the ground. And more than 30 hens and cockfighting roosters languished in cages.

Shockingly, this cruel breeder had been caught multiple times participating in organized dogfighting. Yet he was still somehow permitted to keep more animals. New charges have been filed, but we have yet to see if the courts will finally take such animal abuse seriously.

This case is just one of many in Chile in which known dogfighters and dogfight breeders face little to no consequences when caught, and are set free to continue the cycle of brutality and bloodshed. In fact, one notorious dogfighter, Claudio Lopez, was convicted of multiple animal abuse charges from 2015-2017 and received an astonishingly lenient sentence — NO jail time whatsoever, and not even a fine.

There is hope, however. In August, 2017, Chile passed new laws to strengthen protections for animals. Under ART. 291 BIS, those who commit mistreatment or cruelty to animals face imprisonment, fines and the “perpetual absolute disability for the possession of any type of animals.”

Now, it is imperative that the courts do their part and enforce the law.

Sign this petition urging the Chilean courts to finally take a strong stand against dogfighting and all animal cruelty, and enact a lifetime ban on owning animals for anyone caught participating in dogfighting, illegal dog breeding or any other form of abuse.