SIGN: Justice for Dog Stabbed in the Neck in Front of Terrified Children 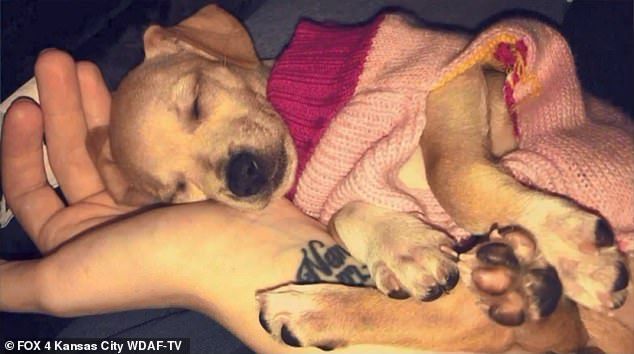 UPDATE (7/7/2022): We sent our petition, signed by more than 23,000 people, to the Olathe Police Department urging for a thorough investigation. We thank everyone who spoke up for this innocent dog! Unfortunately, we learned that a charge of cruelty to animals for willfully/maliciously killing/maiming/disfiguring/torturing animals was dismissed after the suspect completed a diversion program, according to court records. We will keep doing all we can for animals! —Lady Freethinker Staff

In an act so horrific it’s hard to believe, a Kansas man ran over an innocent Chihuahua, then violently stabbed the dog to death in front of her family — including four children.

Kirstyn Barlow was on her way to a playdate with her children and dogs in tow when her Chihuahua Poochies — who was celebrating her first birthday week — ran into the street. A pickup truck struck Poochies and injured her back legs. The driver got out and walked towards Poochies. Kirsten expected him to provide assistance or offer to call a vet — but was appalled when he instead pulled out a knife and plunged it into her precious Chihuahua, stabbing her in the neck as the horrified children watched, helpless to protect her.

The man justified his cruelty by claiming that he put Poochies “out of her misery.” But Barlow believes the dog could possibly have been saved. Regardless, this man — who is as yet unnamed, but was caught on camera — had no right to make that decision, let alone gruesomely stab the helpless animal.

Sign this petition to urge the Olathe police department to investigate this case thoroughly, and prosecute the perpetrator to the full extent of the law.