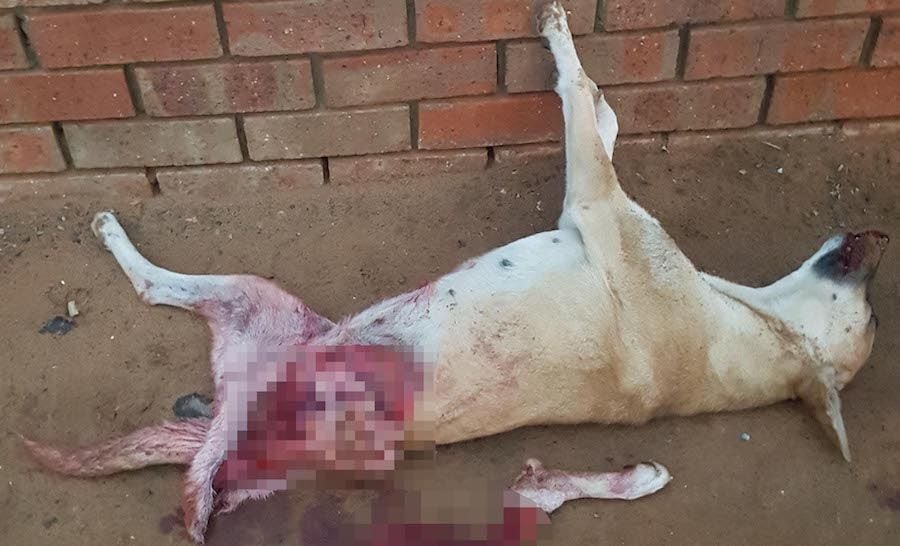 PETITION CLOSED
UPDATE (7/9/2021): Nthabiseng Maletwane was sentenced to a fine of 1,000 South African Rands — the equivalent of about $70 USD — or three months imprisonment on October 15, 2018, for skinning a pet dog alive for fresh “meat.”
We are deeply saddened that this innocent animal died in such a brutal way and hope he is now at peace. We thank the close to 17,000 people who signed our petition demanding accountability, and we will continue to fight for justice for animals everywhere.
*
UPDATE (7/1/2021): Details provided by the SPCA to Lady Freethinker said that Nthabiseng Maletwane was arrested the same night of the incident, on April 13, 2018. He appeared in court but was referred for observation. We will continue to follow this case.
*

When a dog’s owner went looking for their missing companion animal in Bloemfontein, S. Africa Friday night, they stumbled on a horrifying scene. Their beloved pet was being skinned alive on the side of the road by a strange man.

The dog had reportedly been hit by a car, but was still conscious when the attacker began skinning the helpless animal. One leg was severed from the body, and had already been skinned by the time the crime was discovered.

The perpetrator now faces animal cruelty charges, and it is imperative that the courts make it clear that torturing animals will not be tolerated.

Sign this petition to urge Bloemfontein’s chief prosecutor to treat this case with the severity it deserves, and work to ensure that this man never harms another living being again.