SIGN: Justice for Bull with Legs Broken, Dragging Himself Across the Ground at Cruel Festival

Home » Animals » SIGN: Justice for Bull with Legs Broken, Dragging Himself Across the Ground at Cruel FestivalBy Emma Kansiz 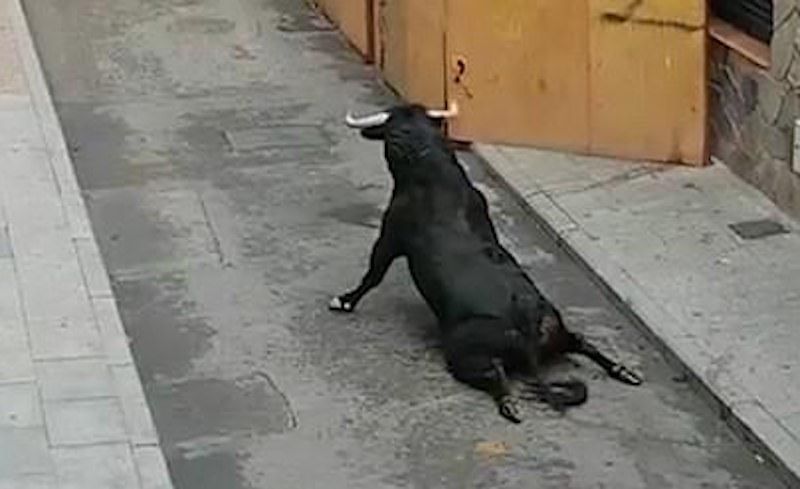 UPDATE (6/30/2022): We sent our petition, signed by more than 20,000 people, to the Spanish Ambassador. Thank you to everyone who signed our petition! Unfortunately, despite multiple checks back, we were unable to obtain any additional information about this poor bull. We’ll keep doing all we can for animals. —Lady Freethinker Staff

In a tragic event in the village of Mejorada del Campo, Spain, a bull painfully broke both of his legs while jumping to the ground from his cage during a cruel bull running festival earlier this week. The impact of the concrete shattered the bull’s bones and he was filmed dragging himself along the ground in agonizing pain.

The bull was clearly suffering, and the video footage is haunting. Observers say that the event organizers had placed the cage too high above the ground, making it impossible for the bull to safely land on his feet.

Bull festivals often masquerade as traditional cultural entertainment when in truth they are merely glorified animal cruelty. These celebrations of torture serve no purpose other than human entertainment, and the abuse inflicted on the bulls forced to participate is devastating.

Sign this petition to urge Santiago Cabanas Ansorena, the Spanish ambassador to the United States, to push for animal cruelty charges in this case as well as fight for a ban on all bull festivals in Spain. If these cruel events are allowed to continue, countless more bulls will suffer a similar fate — or worse.