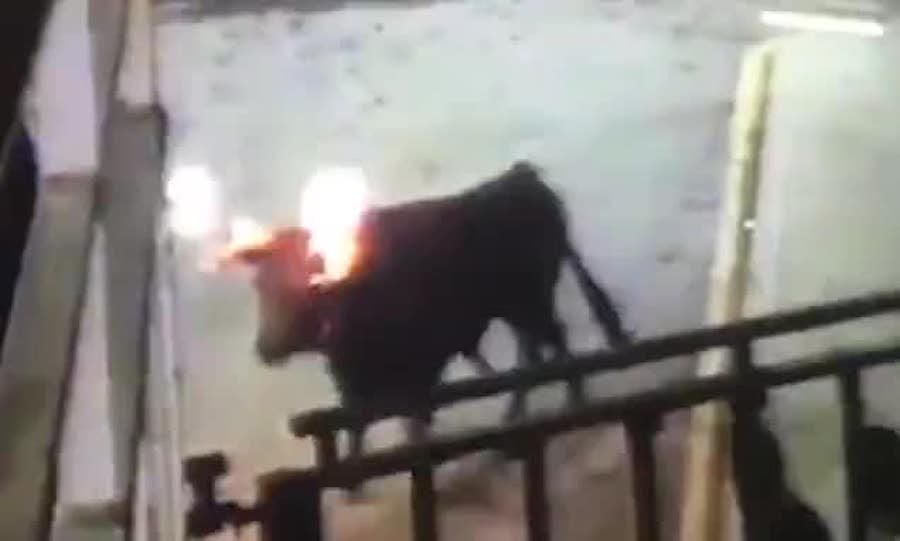 UPDATE (6/22/2022): We sent our petition, signed by more than 21,228 people, to the Spanish Ambassador of the United States to advocate for an end to this cruel practice. Thank you to everyone who signed our petition and raised your voice for these innocent animals! —Lady Freethinker Staff

At the barbaric “La Celebración del Toro Embolado” — or “Bulls of Fire” — festival in Jerica, Spain, bulls’ horns are set on fire as onlookers cheer on the cruelty. Tragedy struck at the latest event earlier this week, where an elderly man was mauled and killed when a bull charged the audience. The bull was frantic and terrified as he ran toward the crowd with a blazing plank of wood strapped to his horns.

Not only does the “Bulls of Fire” festival render bulls severely crippled and injured, it threatens the lives of both bulls and spectators.

In light of 71-year old Rogelio Rodrigo Rodrigo’s death, this event must be condemned for what it is: animal cruelty masquerading as cultural entertainment. The mental and physical torment the bulls undergo is intentionally brushed aside by event promoters and organizers. Rather than receiving consequences for abusing bulls, the perpetrators are applauded for their brutality.

Sign this petition to compel Mr. Santiago Cabanas Ansorena, the Spanish Ambassador to the United States, to push to end the inhumane “Bulls of Fire” festival along with all other “festivities” that harm bulls.