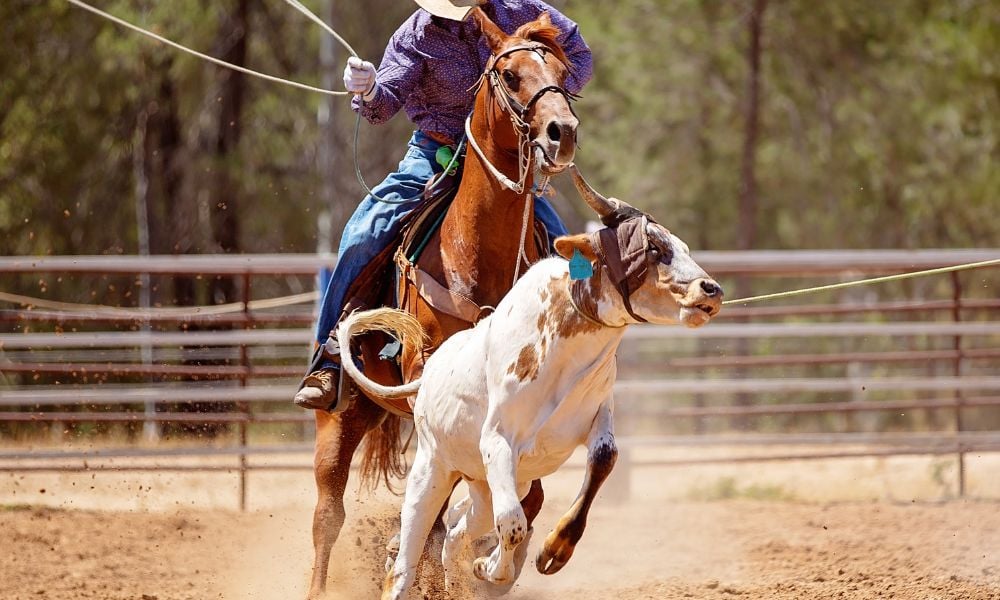 Horses, cows, and baby animals are breaking their necks, suffering gruesome injuries, and enduring immense pain and agitation for people’s “entertainment” at rodeos in Los Angeles.

But now, an ordinance up for the city council’s consideration in January could outlaw those cruel performances.

The ordinance, recently passed by the city’s Personnel, Audits, and Animal Welfare Committee, would ban the use of cruel rodeo “tools” – including electric prods, flank straps, wire tie-downs, lassos, and sharpened or fixed spurs — that cause “aggressive” behavior in animals for people’s “amusement” during rodeo events like bronco riding, calf roping, or wild horse racing.

More than 125 animals have suffered and died in cruel rodeo events since 2001, according to an L.A. Times analysis that warned those casualties are likely a massive undercount.

The analysis found defenseless animals died from crushed skulls, broken legs, snapped spines, and gruesome injuries — including a cow who jumped a fence trying to escape, landed on her face, broke her neck, dislodged an eye, and had to be euthanized, according to the L.A. Times.

At least 28 animals died while performing cruel rodeo stunts — including one horse who ran into a pole and another who suffered a broken neck after ramming into a metal gate during cruel bronco bucking competitions.

At the Folsom Rodeo in 2018, cowboys hogtied a horse who had lost control of her legs and loaded her into a trailer, rather than let the attending vet look at her. At another rodeo event in 2016, a vet was not allowed to treat a baby cow who broke his leg during a cruel calf roping event, according to public records documents.

While the city ordinance would only ban certain devices, both those in favor and against the ordinance have said passage could mean the end of cruel rodeos in the city.

We and our readers support a full ban on gruesome rodeos — as do many local residents and veterinarians in the area.

“I think we have to ask if scaring, provoking and potentially injuring animals — just for entertainment purposes — is something we support as a society,” said Crystal Heath, a Bay Area veterinarian. “I don’t think that’s what the public wants.”

Sign our petition urging the L.A. City Council to pass the ordinance banning cruel and vile devices that cause fear and stress in animals in rodeo events — and to support any additional legislation that would ban rodeos for good.