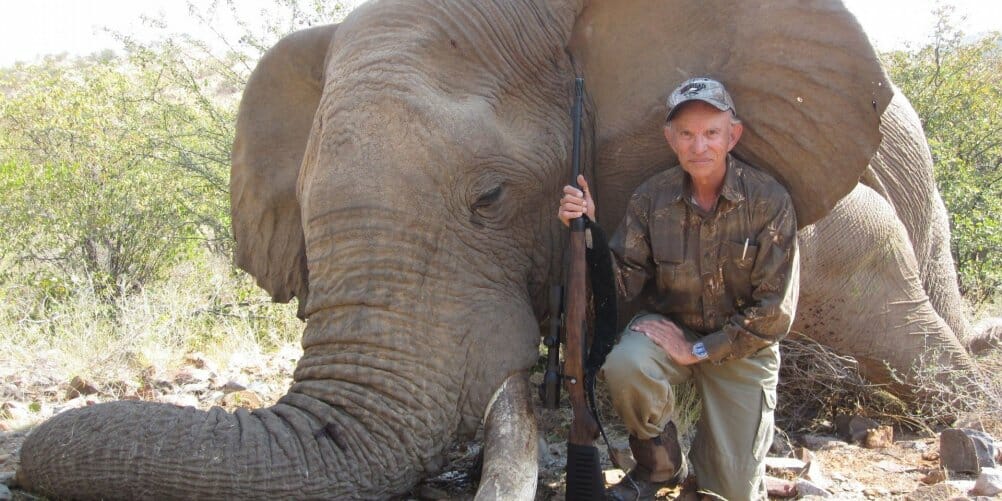 UPDATE (2/23/2022): This bill died in the Senate on 11/30/2020, after having passed the assembly with a 49-16 vote. We are disappointed that such common-sense and life-saving legislation was axed, and we’ll keep doing all we can to stop trophy hunting and all other forms of animal cruelty. —Lady Freethinker Staff

Terrified and trying desperately to flee their killers, defenseless elephants endure immense suffering and agonizing death just so wealthy hunters can hack off their body parts to display as sickening “trophies.” These massive creatures don’t always die from the first shot, often experiencing slow death from a prolonged attack.

Many animals — including rhinoceroses, giraffes, and baboons — suffer similar fates. And during “canned” hunts, lions bred in captivity are released into enclosed areas from which they can’t escape and shot at point-blank range by “hunters.” All this pain and suffering is just so people can hang slain animals or their parts on their walls.

A new California bill, SB 1175, could help end the cruelty by banning the possession of trophies from several African species, including elephants, rhinos, hippos, zebras, and more.

While trophy hunters defend their cruel “sport” with claims that the fees fund conservation efforts and help local communities, research shows these claims to be blatantly false, with many species in serious decline in the countries that allow them to be hunted, according to a Born Free USA report. Additionally, less than one-tenth of a percentage of Africa’s gross domestic product, in countries that allow for trophy hunting, comes from the “sport.” And often, weak governance and corruption ensures this small amount of money never benefits local populations.

Trophy hunting is cruel to animals, indifferent to the communities it exploits, and dramatically lessens the survival rates of some of the world’s rarest creatures. It must end.