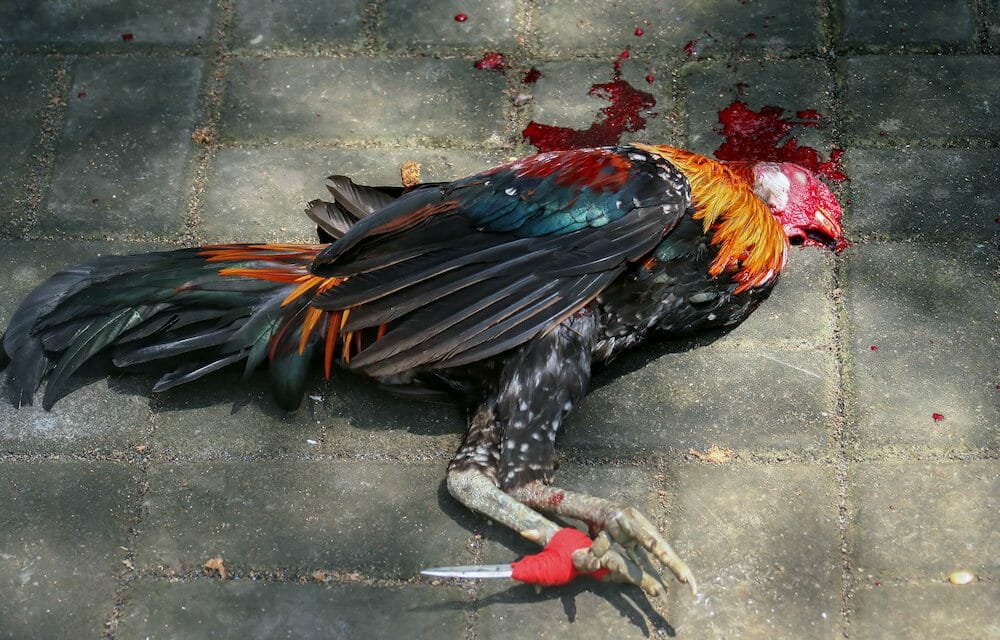 UPDATE (7/18/2022): We sent our petition, signed by more than 27,000 people, to Philippines’ officials. Thank you to everyone who signed our petition! We’ll continue to do all we can for animals. — Lady Freethinker Staff

A local police officer lost his life after a razor-sharp metal spur slashed his femoral artery during an illegal cockfighting raid. He bled to death within minutes, according to the New York Times.

These spurs, known as ‘gaffs,’ are used by roosters in vicious one-on-one cockfighting death-matches in the Philippines.

This gruesome tragedy highlights the inherently deadly nature of cockfighting, which forces roosters to wear dagger-like attachments and shred each other to pieces until one of them dies. If the terrified birds try to escape the enclosure, they’re shoved back into the fighting ring against their will.

Spectators place bets on the winners and watch as the birds stab and kill their opponents, gouging out eyes, breaking bones, and puncturing organs.

Cockfighting is legal in the Philippines. But certain events, including this cruel blood sport, are temporarily banned due to coronavirus-related fears.

It’s time for an end to cockfighting, which needlessly kills countless innocent birds and risks human health and safety.

Sign this petition urging the Department of the Interior and Local Government to issue a permanent, nationwide ban against cruel cockfighting events.