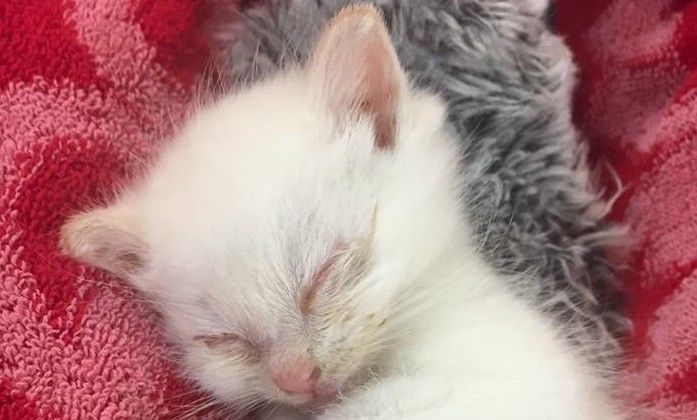 Two years ago, a couple watched in horror as a tiny white kitten was ruthlessly thrown from a car window. The couple immediately rushed to the three-week-old kitten’s aid, picking her up and running for help. Today, that little white kitten is known as April, named after the month of animal abuse awareness. She survived the traumatic ordeal and now thrives in a loving home. April’s full recovery – and the happy life she has earned – is inspiring hope in animal lovers worldwide.

April’s current owner, Joanna DeLuca, recalls the extent of neglect and abuse April had endured, ranging from “pneumonia and anemia” to suffering from dehydration and “ulcers on her eyes.”

“[April] was in horrendous condition and most places would’ve probably chosen to put the cat down,” said Dee Ford, President of SPCA Suncoast New Port Richey in Pasco County, FL.

Fortunately, the SPCA Suncoast fought for April, doing everything in their power to help the battered kitten survive. In her first ten days under their care, the 9 oz. survivor could not even eat from a bottle without help. She required treatment to breathe. The entire staff – including another rescue, a tuxedo cat named Hugo – refused to give up on April and dedicated themselves to looking after her during all hours of the day and night.

“They started working on her and saw a spark of life and just kept going and going,” said DeLuca.

After a long recovery from the injuries, illnesses, and infections she sustained in March 2016, April has become an inspiration to supporters around the world.

Now a plucky two-year-old cat, April enjoys a warm, loving home with DeLuca, who was so touched by April’s story that she novelized it into a children’s book called “April’s Amazing Adventure.” The story, written to teach children the importance of being kind to animals, follows April’s life from hardship to happiness.

DeLuca explains that there is even “a little pledge page in the back that as a family they sign that they will promise to be kind to all creatures.”

Today, April has become a symbol of hope for all abused or neglected animals, reminding millions of people that kindness and compassion can help even the tiniest kitten.