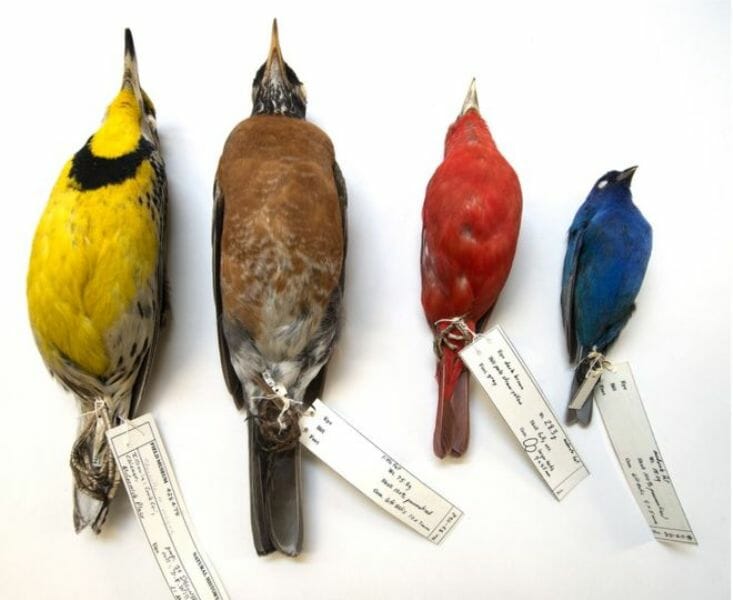 In what may seem a surprising consequence of climate change, migratory birds are becoming smaller, according to a new study published in the journal Ecology Letters.

For over 40 years, scientists and volunteers at Chicago’s Field Museum have been collecting and studying 70,716 migratory birds who died when they collided with buildings in the city.

When the researchers measured the birds – encompassing 52 species — and analyzed the data, they found that between 1978 to 2016 all species had become smaller. Not only did the body mass of the birds decrease, but total body size and leg bone lengths decreased too, with leg bones measuring 2.4% less. However, the birds’ wingspan measurements rose by 1.3% over the same period.

“We found almost all of the species were getting smaller,” says Brian Weeks, lead author of the study and assistant professor at the University of Michigan. “The species were pretty diverse, but responding in a similar way. The consistency was shocking.”

Animals’ inhabiting cold climates are frequently larger than those living in warmer areas, and the fact that temperatures have risen in summer breeding grounds led the researchers to connect the shrinking birds with climate change. “Smaller bodies hold on to less heat; meanwhile, the birds’ wingspans may have increased so that the birds are still able to make their long migrations, even with smaller bodies to produce the energy needed for flight,” the museum said in a release.

“When we began collecting the data analyzed in this study, we were addressing a few simple questions about year-to-year and season-to-season variation in birds,” adds David Willard, a collections manager emeritus at the museum and one of the study authors. “The phrase ‘climate change’ as a modern phenomenon was barely on the horizon. The results of this study highlight how essential long-term data sets are for identifying and analyzing trends caused by changes in our environment.”