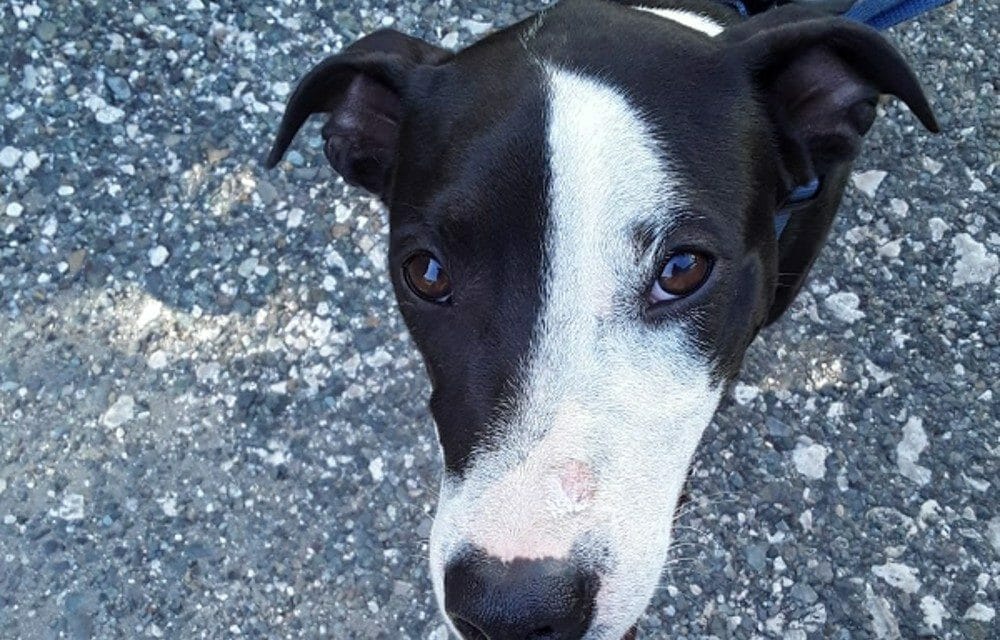 EDITOR’S NOTE: This is a guest post by animal rescuer Cindi Scholefield

A couple brought a tiny black and white puppy into the community yard in downtown Kingston and chained him to the grillwork on their section.

He cried day and night. It was pitiful. The others in the yard were annoyed by the noise, and also because he would occasionally manage to get away and do his business in the communal area, but no one actually said anything. This went on for a couple of months and tensions grew higher and hotter. The couple could occasionally be seen shoveling mess into the open land across the road, but the puppy was escaping more and more often and not being retrieved, till finally they just left him outside. 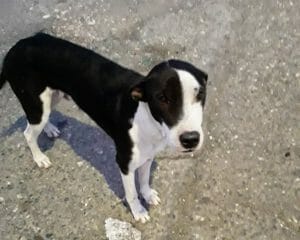 A forlorn little figure, in the mornings when we went on our usual feeding route, we would find him curled into a tight ball in the middle of the dust bowl.

We would call him for food and he would get up, stretch, and walk over, without much enthusiasm. Sometimes he would eat a little, sometimes not. Sometimes he would summon up the energy to stand on his back legs, put his front legs around my waist and gaze into my eyes. He was the picture of sadness. Then he would go back to the little depression he had dug in the dirt and lie down curled up as tight as he could. 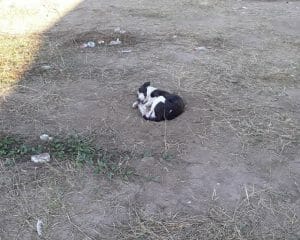 Every day my heart was in my mouth, wondering whether we would see him again, as in that area dogs (and cats) are frequently taken as bait for dog fights, especially if they are alone and vulnerable, as Spot was. To make it worse, New Year’s Eve was approaching, and I knew the fireworks and clappers (illegal but nobody seems to care) would terrify him and probably make him run off.

Prevailing on the “owner” to sign him over to me, I sent out an appeal, calling him Spartacus in the hope that he would grow into the name. To my delight, my friend and neighbor two doors down said she would take him as a companion to her medium-sized brown dog and two small shihpoos, all girls and all spayed. It seemed like a match made in heaven.

Very early next morning I got a frantic call while out feeding the strays and rushed home to find my neighbor, decked out in a dressing gown, standing in front of the gate across from my house with Spot on the other side of the gate. She had managed to loop a leash around his neck and was trying to pull him back out through the bars, but with no success. Clearly, adrenaline and panic had got him in, but would not get him out. I had to call the lady living there and out she came, also in her dressing gown (thank goodness she is a good sport) and laughingly opened the gate to release him.

Turned out he had found a hole in the front fence so the rest of that morning was devoted to cement, zinc and chicken wire and plugging that escape route.

Two days later was New Year’s Eve, and I was so thankful that we had gotten him out of that wilderness to a good home. We went for a quiet drink with friends and got home early, by about 9:30 p.m.,  only to be greeted by another call. The gate had been left open by a thoughtless grandson, he had run out, then run back in, but had been chased by said grandson, and was gone!

We jumped in the car and started driving up and down the streets near the house, with horns honking, lights dazzling, and brakes screaming. The worst night of the year on the road. This was exactly what I had hoped to avoid! I was beside myself!!!!!

We soon realized that he wasn’t going to just appear in the middle of a busy, brightly-lit street, and reluctantly drove home, resolving to go out again early in the morning.

I made tea and didn’t drink it. I tried to watch TV and couldn’t. My anger and anxiety were just boiling over by now and I went back outside to breathe fresh air at my gate. As I looked out, to my amazement, there he was in the road opposite to his new home. I grabbed a leash and yelled to my husband that I was going for him.

A few mornings later the same careless young man left the gate open again and Spot dashed out. My husband was on his way to work and called to say he had seen him on Braemar Avenue, so I jumped into my car and set off. By the time I got there, he was nowhere in sight, but Richard said he had seen him cross the main road and head to New Kingston, so I headed there too. Of all the roads to choose, the one I happened to choose was right and I saw Spot on the corner, panting. Taking this as a good sign, I managed to drive up right beside him and call out to him. But he looked at me, turned his head, and started running again!

This scenario was repeated several more times. On three different occasions I remember calling out to a man on the sidewalk, “Beg you hold that dog.” Spot kept changing direction, and I had a few near misses trying to reverse and do U-turns in all the traffic. Eventually we got to a road where the one-ways immobilized me for too long, and I lost him.

I drove home, mentally kicking myself and cursing.

Two hours later I strolled out to my gate for some fresh air and there he was, looking at me, as if to say “Here I am.” Two seconds later, he took off. For a moment I was stunned. He had found his way home over a good distance in less than two weeks. Smart boy.

But I couldn’t waste a minute. This time I bundled my helper into the car and we managed to keep him in sight as he retraced his steps of the morning. Not wanting to get into all the main road traffic, I saw my chance, and quickly maneuvered in front of him, forcing him to backtrack. After a while I could see he was slowing up (probably as tired as I was), and he chose to sink down in the grass in front of a man who sets up shop on the side of the road in the shade of a large tree and makes wicker furniture. Trying to keep the panic out of my voice, I called to him to please just hold Spot’s collar. He was nervous but he did it and we were able to leap out and nab him. By this time his new owner had driven up, so with the help of another gentleman passing by we got him into her car and he was taken home. Great sighs of relief were breathed by all. 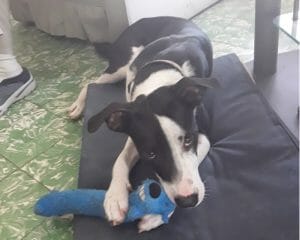 Everything went fine for a while, and along the way his name was changed to Ringo. He looked splendid. He was gaining weight, his coat was glossy, and his legs seemed to be getting longer every day. I wondered, was he going to turn into a Great Dane or a giraffe?

He was also gaining confidence, very affectionate, and full of the joys of spring, which began to cause a problem in the household. In his exuberance, he was constantly jumping up on his owner (who had just had two knee replacements) and not only was she afraid of being knocked over, but her other brown dog was getting very jealous of the attention and growled menacingly whenever he came close, so she was afraid there would soon be a full-scale confrontation ending in bloodshed.

Reluctantly I agreed to look for another home.

In the meantime Ringo found a hole in the fence separating the garden from a narrow gully. It seems that he ran along it and emerged on an adjoining road, where his owner was fortunately able to catch up with him. The hole was properly plugged.

The next time he went into the gully (through a different hole) she went looking for him again, this time without success, and by the time she gave up and came home, there he was relaxing on the lawn. More evidence that he could find his way home.

But the whole Ringo experience was too nerve-wracking, so when a friend of mine liked his photos and offered to take him, she agreed without a qualm.

The day we took him to Spanish Town, I was sad. But Ringo was having a ball, interested in all the scenery and smelling all the smells. 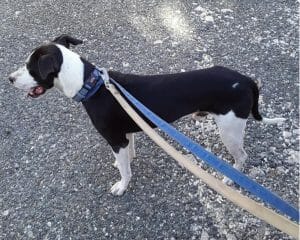 His new family are all dog lovers, with several others in their pack already, and Ringo integrated himself right away into the group. Within days he was playing and romping as if he had always lived there.

When I got a phone call from the new owner a few weeks later I froze as I listened to his story. He had decided that Ringo had been kept contained for long enough, and was going to take him and all the others for a walk on a quiet Sunday afternoon. Normally he keeps Ringo on a leash for a walk but this time he said to himself – Hey it’ll be all right – and snapped it off!

Needless to say Ringo took off like a bullet and headed toward the horizon, and the others, thinking this was a new game, shot off after him, with the owner in hot pursuit. He told me that all the while, he was remembering my tale of frantically chasing after Ringo all over Half Way Tree.

When they got to an intersection the others turned back, but Ringo kept going. Then he changed his mind and ran back, but instead of stopping at his owner’s side, he dashed straight past him. By the time the now-panting owner got back to his house there was Ringo sprawled off on the lawn, with a smile on his face like a pleased puss.

The owner said in all his days of caring for dogs he has never come across this kind of energy. What a difference from the sad little creature curled in a ball in the middle of a wasteland!

I told him the good thing is that he will never have to pay a subscription at a gym.

Happy days, Ringo. You finally found where you belong.