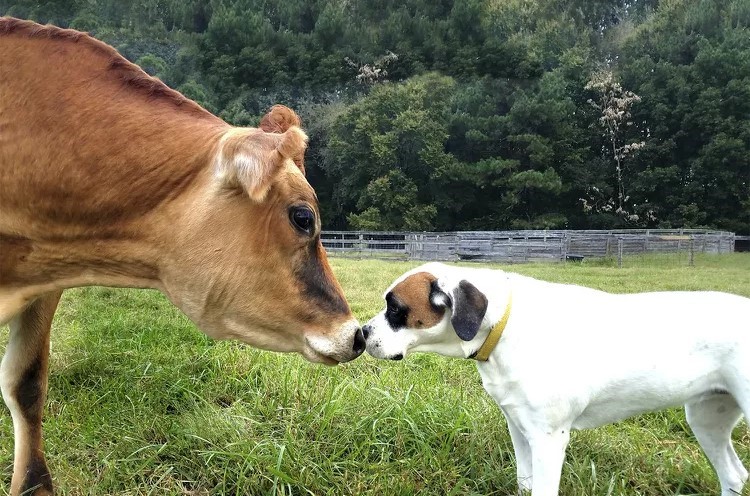 A cow rescued from a live farmed animal auction and a sweet St. Bernard mix have bonded and become best friends at the Little Buckets Farm Sanctuary in Virginia.

The sanctuary’s founder Susan Klingenberg visited a live farmed animal auction in 2017 with the goal of saving a life. With only $10, she rescued a day-old calf whom she named Bucket. Since then her life and dog Colton’s have never been the same.

When he arrived at his new home, Bucket ventured over to Colton’s bed in the kitchen and made it his own. He spent the first night in Klingenberg’s kitchen, immediately becoming part of the family.

The next day, Bucket — who was about the same size as the dog — was sporting Colton’s sweater and eager to be by his new friend’s side. The pair began playing, running outside together, and even snuggling.

“It was so cute, like two peas in a pod,” Klingenberg recalled. “They truly love each other. It’s special to witness. It really has been a beautiful friendship.”

Klingenberg said she finds joy in watching the animals spend time together.

Bucket is now five years old and weighs more than 1,200 pounds, but those differences haven’t stopped the cow-dog duo from enjoying each other’s company. Bucket will often kneel down to be able to reach Colton, and the best friends continue to happily play and comfort one another.

Brighten your day by watching Susan’s heartfelt video of Bucket and Colton!