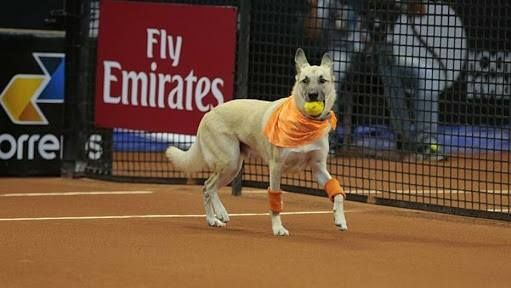 The pups love the opportunity to fetch tennis balls, and fans enjoy watching them sprint out onto the court to do their jobs. The dogs were coached for several months so they understood and accepted that they had to wait while that tempting yellow ball flew and bounced all over the place (what a tease!).

The tricky part, of course, was teaching them to surrender the ball, quashing any expectations of it being thrown for more fetching.

In 2016, the canines sported orange sweatbands on their fore legs and orange bandanas. This year, they were donned in blue accessories. The fans were treated to extra entertainment as the tennis players learned to share the spotlight with the irresistible poochies. The objective was to demonstrate that abandoned dogs are smart, very trainable, and make fantastic pets.

A couple of years ago Venus Williams and Svetlana Kuznetsova played an exhibition match at the ASB Classic in Auckland, New Zealand. There, they were assisted by three ball dogs. One of the pups was a rescue.

Perhaps the ball dogs concept will make its way to the United States and the rest of the world as a way to showcase rescue animals and give them tremendous exposure to potential adopters. No matter who wins the match, there’s a happy ending; last year, all participating dogs at the Brazil tournament were adopted.