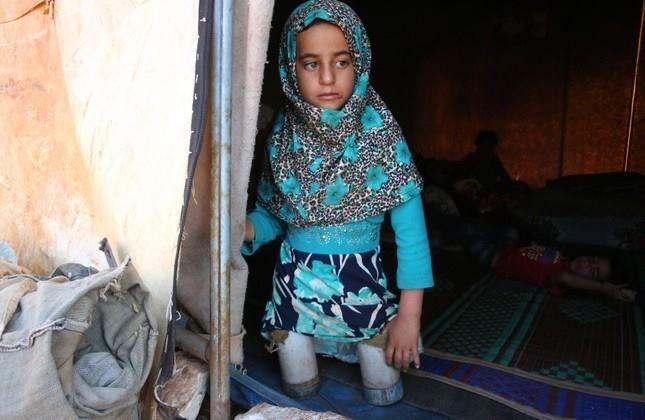 An eight-year-old Syrian girl with no legs is now being fitted with professional prosthetics in Turkey after a compassionate doctor saw photos of her struggling to walk using tin cans as makeshift limbs.

Like her father, Maya Merhi was born without legs due to a congenital disorder. The family – with five other children – previously lived in the countryside adjacent to the war-torn city of Aleppo, but were forced to flee to a refugee camp in Idlip, northern Syria, after the fighting endangered their lives.

Living in tents, Maya and her father Mohammed previously moved around by crawling on the dusty ground, but this became more difficult for Maya after recent surgery further reduced the length of her limbs.

“After the operation, she was not able to move around and was sitting the whole time in a tent,” said Maya’s father, Mohammed Merhi.

Maya’s inventive and caring father fashioned together tin cans and tubing that Maya could use to walk upright. She was able to slowly walk herself to the camp school and back every day.

“The situation, in general, was difficult. She was unable to walk so we had to create something for her to protect her from the ground,” said Mohammed.

After pictures and footage of Maya circulated globally, Turkish prosthetics specialist Dr Mehmet Zeki Culcu was moved to reach out to the Turkish Red Crescent, a humanitarian aid organization. They then evacuated Maya and her father from Syria and took them to Istanbul for treatment.

This big-hearted specialist was so touched by Maya’s struggle that he is personally covering the cost of her – and her father’s – new prosthetic legs.

“We have been contacted by people all over the world who want to make the donation. But this issue is closed and I will take on the cost,” said Dr Culcu. “Maya will walk, God willing, in three months time.”

The time spent learning to balance on her makeshift tuna can legs was invaluable; Dr Culcu said she is already accustomed to walking, so should pick up the knack with her new prosthetics more quickly.

Mohammed Merhi will also receive prosthetic limbs and start the long journey of learning to walk, but needs surgery first to make his limbs ready for fitting. He also wants his daughter to complete her process first.

“It’s more important that she can walk so that she is autonomous. It would be like a new life for us,” said her father. “I dream of seeing her walk, going to school and back without suffering.”

After Maya’s first fitting, she took steps with the help of a walker on the basic, shortened prosthetics. Eventually, they will be lengthened to include a knee joint and made longer below the knee.

The Turkish Red Crescent is supporting Maya and her father while they stay in Turkey. Mohammed’s wife and five other children remain in Syria.