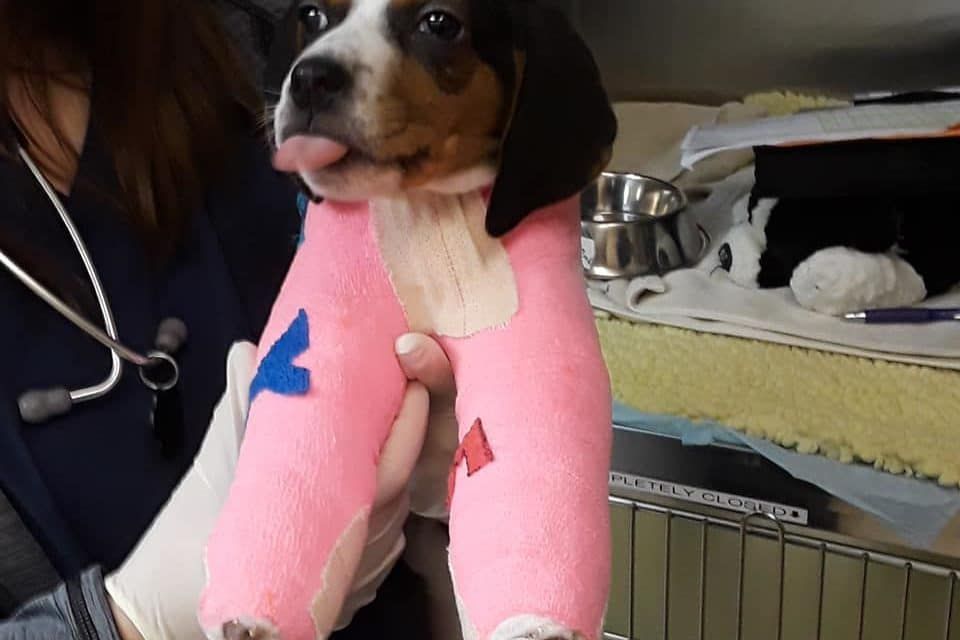 Thanks to veterinarians at Oklahoma State University, a deformed puppy has received life-saving treatment.

When Milo was surrendered to an animal rescue organization, he was just five weeks old and his front paws were turned upside-down.

Dr. Erik Clary, associate professor of small animal surgery, said of the pup’s condition: “We evaluated Milo with our state-of-the-art CT scanner and identified his problem to be congenital dislocation of both elbows.” Clary continued: “With both elbows out of joint, Milo was unable to walk. Try as he may, the best he could do was an inefficient and seemingly uncomfortable ‘army crawl.’”

Earlier this month, Milo underwent corrective surgery at Oklahoma State University’s Veterinary Medical Hospital for his condition, which Clary referred to as “rare and very debilitating.”

According to Clary, Milo’s procedure was complicated: “For each of his elbows, we had to go into the joint and restore the alignment. Then we placed a pin across the joint to keep it straight while his growing bones continue to take shape and his body lays down the internal scar tissue that will be needed for long-term stability. All in all, Milo was under anesthesia for about three to three-and-a-half hours.”

To prevent him from using his front legs while he heals, Milo is currently in a front body splint. Veterinarians will take the pins out of his legs and remove the splint in about three weeks. The pup has a good chance at eventually walking normally if his elbows remain in place until then.

Milo was surrendered by a breeder to Oliver and Friends Farm Rescue & Sanctuary in Luther, Oklahoma. Rescuer Jenny Hays, who runs the rescue, noted that with his condition, he wouldn’t have had any quality of life past the age of just one month.

Although Milo doesn’t enjoy having to stay still, his recovery is reportedly going well. The projected total of his surgery and rehab is at least $4,000, and Hays isn’t yet sure if he’ll be up for adoption after he recovers.

One thing, however, remains certain: thanks to the heroic rescuers and veterinarians who worked tirelessly to correct Milo’s “upside-down paws,” he may get the chance at the normal canine life he deserves!