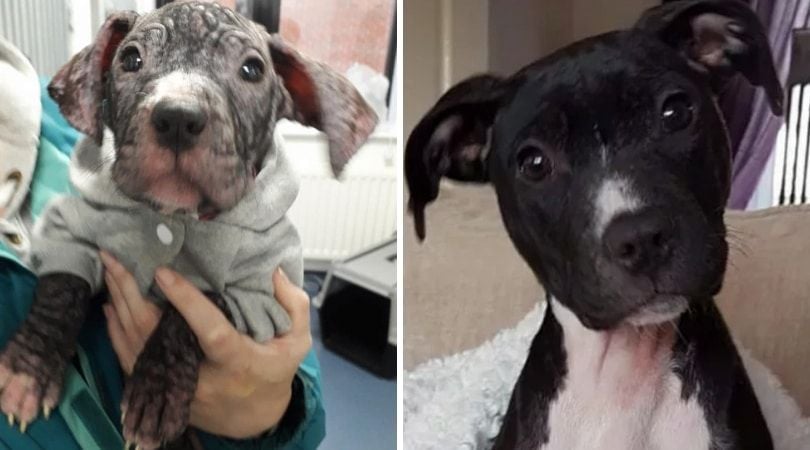 Around Christmas last year, an innocent ten-week-old puppy was placed in a bag and abandoned in the freezing woods. She was in dire need of medical care, and the RSPCA officers and veterinary staff that worked to save her life didn’t expect her to survive – but, to their amazement, she did.

The puppy, who was thought to be around nine weeks old, was discovered on December 28, 2017, by a couple taking a lunchtime walk through the forest in Stockton-on-Tees in Durham County, England. She was in a plastic bag, covered in scabs, and almost completely bald.

With barely any fur to keep her warm and temperatures as low as minus 2 degrees Celcius, the little pup was in danger of losing her life. Just hours after being rescued, the spot where she’d been discovered was covered in five inches of fresh snow.

Claire and Rob Neal, the couple that found the puppy, took her to a veterinarian for treatment for her skin condition, where she was diagnosed with a severe case of mange. The couple named her El after Eleven, a character from their favorite TV show Stranger Things, who was also found in the woods.

El was fostered throughout last year’s holiday season before being adopted by Antony and Karl Simmonds of Redcar on Teesside. Since being adopted, her fur has grown back into a healthy, shiny coat. She’s become comfortable at her forever home, where she loves playing fetch on the beach and napping on the sofa, and where she’s undoubtedly had a much better Christmas than last year!