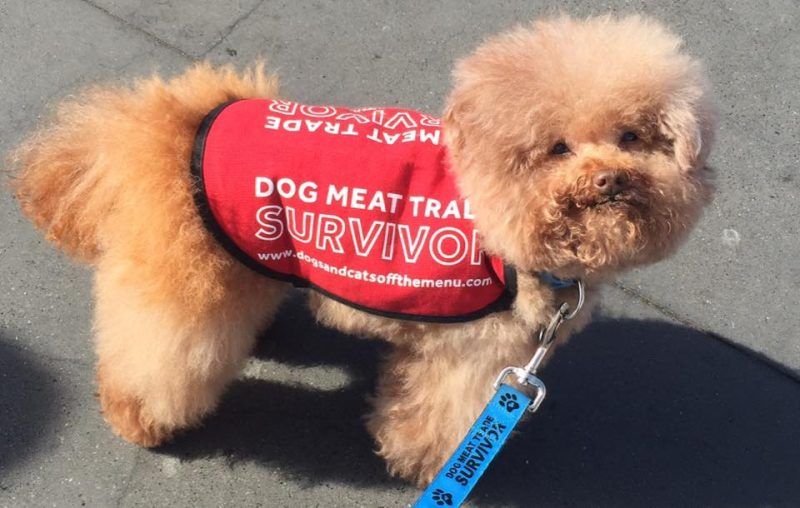 When Willow was eleven years old, his guardians decided they no longer wanted the aging poodle and sold him to a South Korean dog meat farm for $20.

Willow was gaunt and covered in filthy, matted fur. His teeth were rotting out of his mouth. There were also cuts on his ears and his tongue was infected.

He was discovered at the farm by rescuer Nami Kim of Save Korean Dogs, who knew Willow was a perfect fit for her friend Heather Heath, an animal advocate who lives in Las Vegas.

Heath, who has years of experience campaigning against the dog meat industry and is admittedly a “sucker for senior dogs,” eagerly agreed to take Willow into her care.

Willow and Heath took to one another immediately. He quickly became comfortable in his new home, and his family fell in love with his upbeat personality.

The pup is now an ambassador against the dog meat trade and travels with Heath to help raise awareness.

Many people shy away from learning about the dog meat trade because it’s inherently gruesome.

Heath explained how Willow makes it easier for people to learn about this upsetting but important issue: “My idea was, let’s take Willow, this really cute dog who survived the trade and have him help educate people in a gentle way.”

“So many times I’ll stand there with tears rolling down my face seeing kids pet him and having their parents listen in on what we have to say. It reminds you that it’s not a hopeless cause.”

Willow has gained a widespread social media following and is the face of a campaign called “I Am Willow I Am Not Food,” which raises money to fly dogs rescued abroad to forever homes in the US.

It’s hard to imagine why someone would want to kill and eat a lovable dog like Willow, but some 30 million dogs are slaughtered and consumed every year throughout Asia. Willow’s journey reminds us of the importance of defeating the dog meat trade.

Lady Freethinker is working aggressively to put an end to the horrific dog meat trade and save the lives of millions of animals subjected to this cruelty.