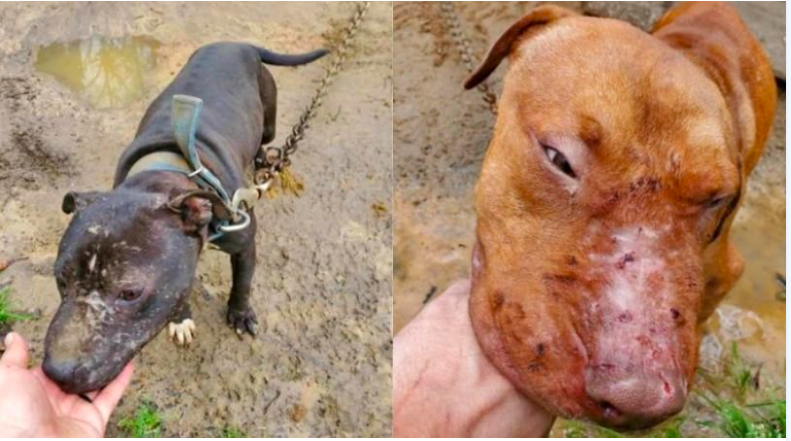 Image via U.S. Department of Justice

Close to a dozen people now have pleaded guilty  — and six have since been sentenced — to federal charges of drug and dog-fighting violations, following an investigation of a horrific dog-fighting ring in which federal agents seized more than 150 dogs from multiple homes in Georgia.

A  federal investigation from May 2019 to February 2020 revealed a criminal organization involving both cocaine distribution and organized dog fights in Roberta, Ga., that also bled into north Georgia, Florida, and Alabama.

Lady Freethinker thanks the more than 32,500 supporters who demanded accountability for those responsible for forcing dogs to brutally fight each other, and to all agencies involved in investigating and prosecuting these individuals.

Dog victims rescued by investigators included an emaciated and overbred female pitbull, chained with both her legs broken, and other malnourished dogs sporting injuries from recent dog fights.

An indictment is a series of allegations brought forth by a probable cause determination by a grand jury against individuals, who are innocent until convicted.

But all defendants have since pleaded guilty — with the exceptions of Whitfield, whose case was dismissed, and A. Davis, who pleaded not guilty, according to records from the Public Access to Court Electronic Records (PACER) database of federal cases.

Assistant Attorney General Todd Kim, of the Justice Department’s Environment and Natural Resources, said the cases illustrate “the connection between the underworld of drugs, organized crime, and dog fighting,” while Acting Attorney Peter Leary said none of that activity will be tolerated by the office.

“Dog fighting venues are magnets for a multitude of dangerous criminal activity,” he said. “Our office and law enforcement will not tolerate animal fighting or the crimes surrounding it.”

Six of the individuals have been sentenced, with the remaining four individuals facing stiff penalties.

Those who pleaded guilty specifically to dog-fighting charges generally faced up to five years imprisonment, fines of up to $250,000, and up to three years of supervised release. Those charges, however, were tagged onto drug-related charges that carried more serious prison time and fines.

According to PACER, those sentenced thus far:

Most of those with cases still pending have their next court dates currently scheduled for January 2022 before U.S. District Judge Tilman E. Self, III. According to PACER:

Vegas — a well-known dog-fighting trainer, and owner of Cane Valley Kennels, according to the Attorney’s Office — pleaded guilty to a charge of conspiracy to participate in an animal fighting venture on Sept. 14. He faces a maximum five years in prison, a maximum fine of $250,000, and three years of supervised release. His next court hearing is planned for January 11, 2022.

Lockett pleaded guilty on Oct. 7 to distribution of cocaine and conspiracy to participate in an animal fighting venture. He faces a maximum sentence of 20 years imprisonment, a max fine of $1 million, and supervised release of up to three years. His next court hearing is planned for Jan. 11, 2022.

Raines pleaded guilty on July 20 to counts of conspiracy to possess with intent to distribute cocaine and conspiracy to participate in an animal fighting venture. He faces life imprisonment, a max fine of $10 million, and five years of supervised release. His next court hearing is planned for Jan. 6, 2022.

A. Davis, who has pleaded not guilty, currently has a pre-trial conference set for February 24.

We will continue to watch for the sentencing of the final four defendants.