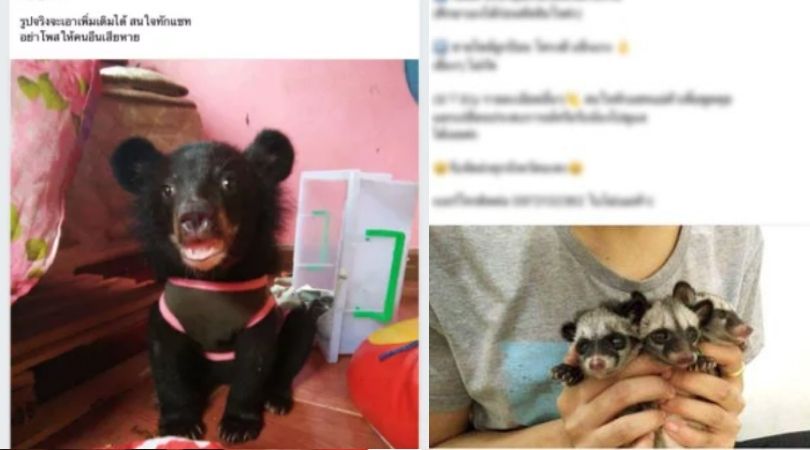 UPDATE (6/22/2022): We sent our petition, signed by more than 18,000 people, to Facebook. We also wrote to Facebook several times over the ensuing years to advocate for an end to this cruel practice. Unfortunately, we’ve not been able to obtain any additional information on this situation. We will keep doing all we can for animals everywhere. —Lady Freethinker Staff

A shocking new report reveals more than 1,500 exotic animals listed for sale on Facebook in Thailand. Some of the posts sell live animals, while some advertise dead animals or various body parts.

Researchers from wildlife trade monitoring organization TRAFFIC found 200 different wild animal species listed on Facebook, including those barred from international trade, such as the black spotted turtle, the Asiatic black bear and Eurasian otter. There was even a critically endangered Helmeted Hornbill.

Animals endure unimaginable suffering in the exotic wildlife trade, often ripped from their families as babies or raised in decrepit breeding facilities. Those who manage to survive transport by smugglers end up cruelly confined by “owners” with no clue how to meet their most basic needs.

Although Facebook representatives say the platform does not allow the sale or trade of endangered species or their parts, many of the monitored trafficking groups have been in operation since 2016 and their memberships have doubled in the last two years.

The illegal wildlife trade is a global problem of epic proportions, putting entire species at risk. Facebook must act now to stop this travesty.

Sign this petition urging Facebook CEO Mark Zuckerberg to address this issue at once, and shut down all sales of animals and animal parts on their platform.