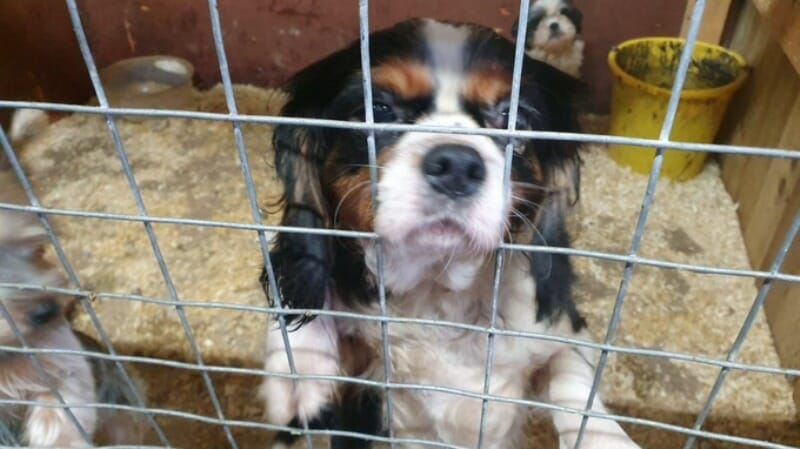 UPDATE (10/28/21): The investigation into this animal cruelty case is still ongoing, a communications person with the Police Service of Northern Ireland told Lady Freethinker.

“Enquiries into this matter are still ongoing,” said Michael Simms via email. “It is a complex case apparently and the two arrested men remain on police bail pending further police enquiries.”

We will continue to check for developments and will report back when we have more information. —Lady Freethinker Staff

Cruelly locked up and crammed into dirty cages to be sold on for profit through a merciless and illegal trade which causes immense suffering to dogs. This was to be the fate of 31 canines, including heavily pregnant bitches and tiny puppies, found in Northern Ireland.

Dogs who are illegally bred often have very short lives. They can contract life-threatening diseases like the highly contagious parovirus, which frequently proves fatal to dogs, especially puppies. They can also develop distressing behavioural problems due to the horrendous conditions in which they are kept.

Thankfully these 31 dogs were saved from a devastating future due to a major investigation targeting organized crime involving the illegal breeding and selling of puppies.

Two men suspected of fraud by false representation were arrested and released on bail while investigations are ongoing.

These dogs and puppies can now look forward to a brighter future, but the lucrative business of illegal puppy breeding must be stopped.

Sign this petition to urge Cllr Ronan McGinley to prosecute the perpetrators to the fullest extent of the law and send the message that profiting from animal suffering will not be tolerated.

The police are appealing to anyone who may have bought a puppy from the Mid Ulster area in the last six months to contact them on 101, quoting reference number 915 05/12/19