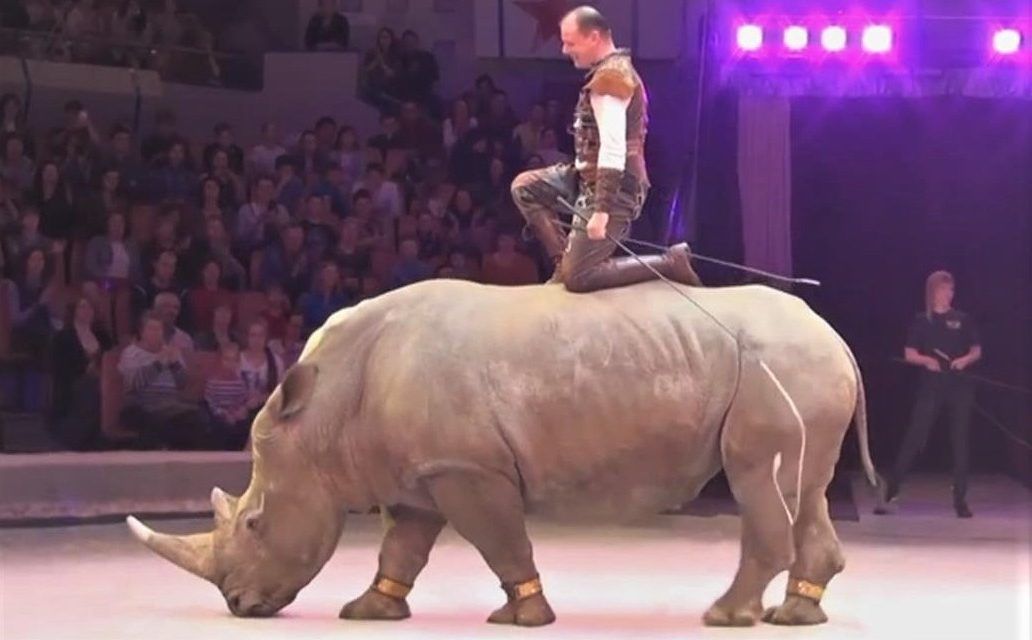 UPDATE (6/16/2022): We sent our petition, signed by more than 21,000 people, to the Russian Ambassador to urge an end to this cruel captivity. Despite multiple checks back, we’ve been unable to obtain any additional information on Mafa’s situation. We’ll keep doing all we can to advocate for animals. —Lady Freethinker Staff

Forced into a sad, lonely life of suffering for human entertainment, an endangered white rhino named Mafa performs demeaning tricks over and over again, rented out to Russian circuses for profit.

Under threat of a whip, Mafa must parade around the ring with the trainer on her back, under a bright spotlight with loud music blaring.

In footage of a show at the Russian State Circus, Mafa is clearly afraid of the whip — the weapon is repeatedly flicked towards her face and across her body as she cringes and moves away from it. This indicates that she was trained and “broken” using violent methods, as is typical with exotic circus animals.

Only around 20,000 white rhinos remain in the wild. They live in extended family groups with complex social structures; holding a single rhino alone in a traveling circus is incredibly inhumane, and forcing her to perform degrading tricks out of fear is nothing short of cruel.

Sign this petition calling on Russian Ambassador Anatoly Antonov to push for a ban on the outdated and inhumane practice of using wild animals in circuses, and to free Mafa from cruel circus life and send her to a sanctuary to live in peace.