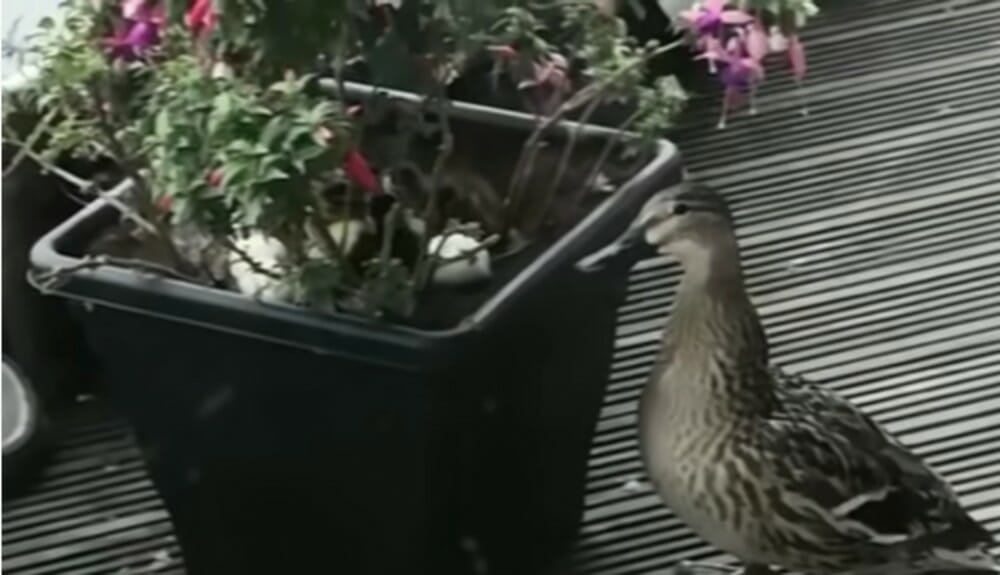 Retired Navy Survival Specialist Steve Stuttard got a welcome surprise last May when he spotted a female mallard nesting in the Fuschia plant on the balcony of his ninth floor apartment in Salford Quays in the United Kingdom.

His daughter, Emma Newman — a science fiction writer and author of the Planetfall Series — took to Twitter to recount the bond her dad built with the mama duck over the next 28 days and the rescue plan he hatched to get her ducklings safely to water, 150 feet below.

Newman hoped the post would brighten someone’s day during the global COVID-19 pandemic, but she had no idea the story would soon go “bonkers.”

“I’m going to tell you about something good happening, something tiny and sweet and inconsequential in the hope it might help you if you are feeling as overwhelmed by horror as I am,” she wrote in a Tweet that has since earned more than 44,000 “likes” and been retweeted more than 9,000 times.

Bloody hell, everything is just awful and I am so angry about so many things… so I'm going to tell you about something good happening, something tiny and sweet and inconsequential in the hope it might help you if you are feeling as overwhelmed by horror as I am.

Newman informed her audience that her father, now in his 60s, adored wildlife — especially birds. He had been a member of the Royal Society for the Protection of Birds for decades and had been thrilled to find the mama duck — whom he christened Mrs. Mallard — quacking over her seven eggs.

“When this duck picked his balcony, out of dozens of potential nesting spots, she did well,” Newman tweeted. “Apart from the whole DEADLY DROP OF DOOM to the water bit. She found the best human to help her. And my Dad takes this responsibility VERY seriously.”

Stuttard started by rearranging the planters on his balcony and stopping the gaps for the future ducklings’ safety.

He obtained a bucket and a 150-foot rope with which to lower them to the ground when they hatched — explaining to BBC News that he couldn’t take the ducklings down in the building’s elevator because the ducklings needed to hear their mother at all times to keep the maternal bond strong.  He also covered half his patio windows with old maps so Mrs. Mallard wouldn’t be flustered or startled by his movements inside his flat.

“From when I wake up in the morning, I have to sort of tiptoe around the apartment,” he told BBC News.

As the anticipated D-Day — “Duckling Day” — approached, Stuttard rearranged his sleep schedule to wake at dawn each morning, the time that ducklings usually hatch.

Newman narrated the series of events of the happy day, after all seven ducklings safely reached the canal and Stuttard declared “Operation Mallard” an “absolute success.”

“He lowered them down to the ground in the bucket while Momma Duck watched carefully and provided a loud commentary throughout,” Newman Tweeted. “Then he raced down to ground level and made sure they reached the water.” 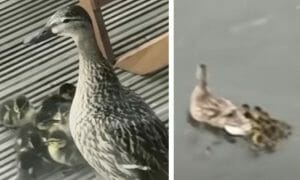 Mrs. Mallard and her babies from 9th floor to the water 150 feet below (Images screenshot via YouTube)

Mrs. Mallard returned again this year, choosing a different planter and also laying 11 eggs. Stuttard anticipates the eggs will hatch around May 5.

He’s working on a new plan to get the ducklings to safety, involving two people and two ropes, as last year a gusty breeze almost banged the bucket against the building and he had to rely on the help of a kind stranger on the third floor, who had recently stepped outside, to help stabilize the rope.

Newman said she will continue to Tweet updates about the new batch of babies via her Twitter handle @EmApocalyptic.