Home » Animals » NYC Activists Race to Save Nearly 300 Chickens Who Fell Off the Back of a Delivery TruckBy Heidi Yanulis | September 17, 2021 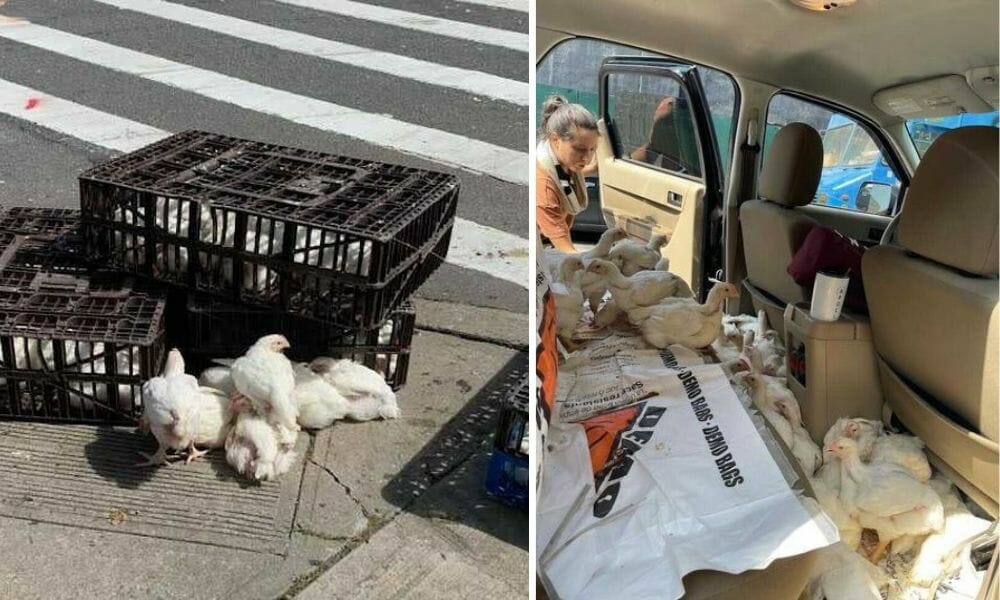 Animal Care Centers of New York City (ACCNYC) staff rushed to rescue nearly 300 Cornish cross chickens abandoned in a busy intersection in Brooklyn, N.Y., after they fell off the back of a delivery truck.

Over 250 of the chickens survived. Only 14 required veterinary care, but sadly, 30 died, according to an ACCNYC spokesperson.

The owner of the slaughterhouse responsible for transporting the chickens, who were boxed in creates and presumably destined for use in the horrific and outdated Jewish ritual of Kapparot, refused to rescue them, according to Katy Hansen of ACCNYC.

Kapparot — carried out ahead of Yom Kippur, the holiest day in Judaism — involves swinging a live chicken over one’s head three times and reciting a prayer to transfer sins to the bird. The chicken is then slaughtered and donated to the poor.

While money has replaced chickens for many Jewish groups in recent years, the cruel practice continues in Brooklyn’s ultra-Orthodox Jewish neighborhoods. As many as 100,000 chickens are slaughtered in New York City during Kapparot each year, according to the New York Daily News.

The animal rights group Alliance To End Chickens as Kaporos has waged a years-long battle against the abusive ritual. In 2020, the group filed a lawsuit demanding the city Health Department ban the practice, which takes place on public streets, arguing it poses a major health risk akin to an Asian live animal market.

Organizations in Israel have also fought against the traditional practice, claiming its abusive nature violates the country’s animal cruelty laws, which criminalize the torturing of animals.

Israel’s Environmental Protection Minister Tamar Zandberg, a longtime animal rights activist, waded into the controversy this year when he called on the country’s religious communities to donate money instead.

“Rabbis have also come out over the years against the practice, which involves great suffering of the animals, and the donations to charity turn the mitzvah into something even greater,” said Zandberg.