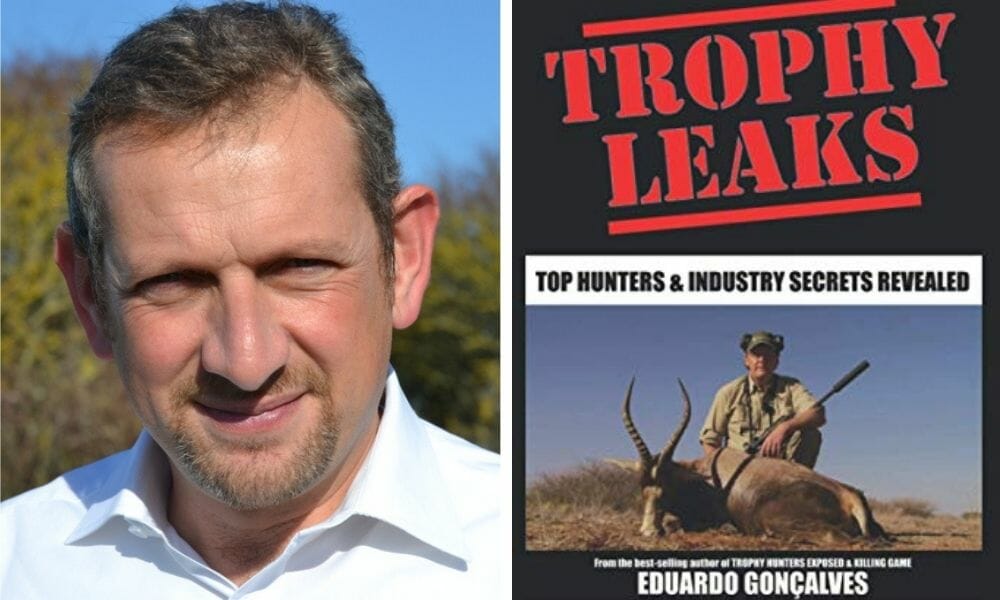 When Eduardo Gonçalves — a renowned campaigner and investigative journalist — heard about the brutal killing of elephants in Botswana for “trophies,” he resolved to take action and make a change.

He wrote a book, exposing the powerful and affluent network of people who kill exotic animals as part of the brutal blood “sport.”

Then he wrote another book, detailing how the massive numbers of animals killed by trophy hunters — an estimated one animal every three minutes — has helped lead endangered species to extinction.

He founded nonprofit Campaign to Ban Trophy Hunting, whose mission notes that trophy hunting is “cruel, archaic, immoral and unjustified” and “can inflict significant pain and suffering, undermines genuine conservation, and brings no real benefits to local communities.”

And then he wrote another book.

Safari Club International did not return media inquiries prior to publication of this story.

The organization bills itself as promoting “advocacy to protect the freedom to hunt and to promote wildlife conservation worldwide,” but Gonçalves’ fearless deep-dive reveals a far darker truth.

In his intensely detailed and evidence-based book, Gonçalves lays out SCI’s inner workings, including a “records book” and level-up prize system that encourages hunters to kill ever more animals, on every continent, despite their vulnerability status — including cheetahs, polar bears, elephants, rhinos, giraffes, pangolins, and others of the world’s most beloved and iconic wild beings.

Some of the species logged in SCI’s “Records Book” — including the Arabian Oryx — have since gone extinct in the wild, Gonçalves notes.

“Like an arcade game, the awards escalator keeps the hunter hooked and in constant search of greater recognition — for which more and more animals must die,” Gonçalves wrote in Trophy Leaks.

In the same book, Gonçalves details the pathetic strategies used by some of the world’s most touted trophy hunters — including shooting captive-bred lions within fenced enclosures offered via controversial “canned hunting,” or having expert guides lead hunters armed with heavy artillery straight to unsuspecting animals during extravaganzas whose costs can top $40,000.

He also divulges the ghastly number of animals single handedly killed by some of the world’s “top” hunters —   including the 102 hunters who cumulatively killed close to 47,000 animals in order to receive the “World Hunting Award,” and the 14 karat gold ring encrusted with diamonds and presented at an annual cocktail reception, for that “achievement.”

He goes undercover to talk with hunters, who outside of media interviews drop the talk of how hunting is needed for “conservation” and speak instead of the adrenaline rush, the excitement, and the thrill of slowly and brutally massacring animals — what one hunter compared unabashedly to “mainlining on heroin.”

While Trophy Leaks is not for the faint of heart, Gonçalves believes that without awareness, innocent animals will continue to suffer in a critical and altogether-winnable fight.

“The world’s wildlife is teetering on a cliff’s edge,” he wrote. “I hope that this book, along with the first two books in this trilogy, helps to show trophy hunting is nothing but a cruel, archaic activity which can play no part in a society that considers itself civilized.”

Gonçalves spoke with Lady Freethinker about the driving force behind his work to ban trophy hunting, what he’s learned through years of research and undercover interviews, why everyday people should care and what they can do to make a difference.

The following Q&A combines that interview and select excerpts from Trophy Leaks, as indicated. Answers have been edited for length.

To learn more about Gonçalves and his work, visit Campaign to Ban Trophy Hunting (CBTH) here. You can also follow CTBH on Twitter at CBTHunting and on Facebook at @bantrophyhuntingcampaign.

When did your interest in animal welfare issues start?

I’m of Portuguese origin. I remember I was seven or eight years old and being with family one summer, and there was a van going around the neighborhood advertising bull fighting. The whole thing seemed completely crazy to me. Why would you chase a big cow and make fun of it, and how is that entertainment? We as humans do not have the right to be killing other animals purely for our own entertainment. Point blank. End of story.

What do people most need to know about trophy hunting?

There’s this extraordinarily powerful and well-funded industry which is promoting awards for people who shoot the most animals in the most number of places, with different weapons, and some of the prizes — like the Hunting Achievement Award handed out by Safari Club International — to get the Gold Award you have to shoot animals from at least 100 different species. For the Diamond Award, it has to be at least 125 different species.

You have these Oscar-style award ceremonies, as if the people who received these awards should be lauded and held in great esteem, and they are people who have committed atrocities.

What was shocking to you about trophy hunting when you began your research?

The first thing that shocked me was the glibness of the language; it really felt like they thought it was perfectly normal to talk about killing animals in this way. And also the sheer duplicity. On the one hand, when they have a media microphone in front of them, the industry, its lobbyists, and the key protagonists all talk about trophy hunting like they are performing a service to wildlife, and this is all in the name of conservation. Take the microphone away, and when you listen to them and talk to them directly and follow their forums, what they’re talking about is the adventure, the joy, the thrill, the adrenaline rush, the addiction.

Trophy hunting isn’t about one or two aberrant individuals who go out to do this. This is a powerful, well-funded, well-organized industry that has major lobbying operations… and they are prepared to stoop to these dirty tricks and underhand tactics to try to thwart the will of the people.

Talk to us about the claims that trophy hunting helps alleviate poverty for indigenous people.

(From Trophy Leaks) When defending their sport in the media, trophy hunters will often claim they are creating jobs for poor Africans or that the fees they pay help to fund conservation work. Away from the microphones and cameras, though, it is often a very different story. Books, articles, and hunting forums rarely — if ever — talk about poverty alleviation or helping wildlife. Instead, the talk is of the thrill of the hunt and the hunter’s seemingly helpless addiction to it… It’s like driving a luxury car, though in this case, the lives of animals are taken.

Your book notes that in “canned hunting,” captive bred animals are shot from within enclosures, and that a new “trend” involves people armed with automatic rifles shooting hogs from helicopters…

You don’t have to scratch the surface very hard to enter the world of the utterly bizarre. They talk about this like it’s some epic struggle between man and beast, on a fairly level playing field. It’s not. These are organized trips where you’ve got scouts who know where the animals are and are taking you to them, and then you’re shooting them from 200 meters or more, and you’ve got a very powerful rifle, a very powerful scope. And you’re a long way away from any danger yourself, with these big bullets that are going to rip a hole through the animal.

Have you heard from any of the hunters you expose in the book or from Safari Club International?

They’ve not contacted me directly. They do like to say a lot of things about me on social media. I suspect I’m probably not on the Christmas card list of any trophy hunters. They weren’t expecting this, and I guess that’s why this has been allowed to continue. The industry hasn’t been put under the microscope.

How do you stay sane while immersing yourself in your research?

I have a small farm in Portugal — mainly a cork farm. It’s a very sustainable form of farming, because you’re literally only intervening once a decade, and it’s incredibly wildlife rich. I have managed my farm to encourage wildlife. I have trail cameras around the place that film passing wildlife, so I’m aware of and thoroughly enjoy seeing the photos in the film clips of the animals I have on my land. I’ve seen wild cats, badgers, jennets, and Egyptian mongoose, and I have some eagles of different species.

Seeing these creatures thrive, breeding, bringing their new kits into the new season…. that keeps me in perspective. We humans behave as if we are the supreme beings on earth,  but we’re not. We are one amongst billions of species, and no species has a greater or lesser right to exist and to live in dignity and peace than any other.

It constantly reminds me that we are one of many in a complex web of life, which involves so many different types of flora and fauna that all depend on one another, and that we, as humans, need to learn to live with respect and humility in the natural world.

Is there anything else you’d like readers to know?

One of the things I’m trying to get people to be more aware of is the level of suffering and cruelty that’s involved. We just talk about the shot that’s taken, the animal that’s killed, and then there’s a trophy on the wall. But the reality is that over half of the animals killed by trophy hunters are injured rather than killed outright. Some of it is that they’re [the animals] shot from a great distance away, or they’re [the hunters] not going for brain shots that would be the most likely to lead to an instantaneous death, but that might “spoil” the aspect of the trophy and how it looks above your fireplace. So instead they try to go for these very complex or difficult-to-achieve heart and lung shots, through the shoulder, which — at 200 meters — is a pretty difficult shot.